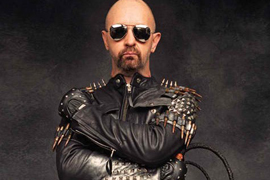 If there’s anyone who’s done it all in rock/metal, it’s Rob Halford. From Judas Priest, to Fight, to 2wo this guy has had one of the most versatile and productive careers in heavy metal history. It’s become commonplace these days to see rock stars and bands take long breaks and hiatuses from writing, recording and touring, but not Rob. If you take a look back at his career over the last thirty five years, you’d find nary a significant break from music in that entire span. Rob is back yet again, this time solo after some lengthy touring in support of 2008’s Priest concept album Nostradamus.

While Judas Priest has always stuck to roughly the “metal” sound, Rob has always liked to change it up for his solo material. Like a true innovator, he’s brought a strong sense of originality and creativity to his solo albums, evidenced no more than by his last release, 2009’s Halford III: Winter Songs. Winter Songs was a rather adventurous metal reinterpretation of, of all things, traditional Christmas/holiday songs. Even though the Christmas season is here yet again, Rob has gone back to his roots on Halford IV: Made of Metal, released just at the end of September. The record features fourteen brand new, hard hitting songs that would be pleasing to any Halford/Judas Priest fan. Rob wrote and recorded the record during the latter part of 2009 and 2010 largely along with his closest collaborator Roy Z who also produced the album.

Rob has described Made of Metal as the most “personal” release of his solo career, in terms of his song writing and his emotional connections to the songs. The lyrics are a far cry from your typical moodiness and pessimism that pervades heavy metal music past and present. He’s now nearing his sixtieth birthday and Made of Metal is a very good illustration of where Rob is at in terms of not only his music, but also his outlook on life. There is a sense of optimism present on some of the songs, quite unlike the machoness you’d expect from most metal bands.

The Halford band recently wrapped up its first, full-length cross-Canada tour as a special guest of the master of metal himself Ozzy Osborne. This is the first time Rob has played with the Halford band in over seven years, which has also included stops in Japan, South America and the United States. The band is currently finishing off the year with shows on the east coast of the U.S. with lots more touring planned for 2011. And if the past is any indication, expect to see plenty more of Rob in all musical varieties for years to come.

Check out the song: “Made In Hell”