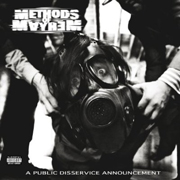 In case you are not familiar with this project, Methods Of Mayhem is the brainchild of Motley Crue drummer Tommy Lee. I must say that when I first received this disc I was not sure what to expect. When their first disc came out years ago I just couldn’t get into it. I know that many people did as it was certified Platinum, but it just never did anything for me.

So not expecting much I popped the disc into my player and man, was I surprised. “Drunk Uncle Pete” kicks the album off and really sets the tone for what I think is a really good record. I think the best way to categorize this is perhaps nu-metal as there are lots of hip hop influences mixed in with hard rock and metal.

The record grooves, from the first note of “Drunk Uncle Pete” to the end of the disc there is a sort of grooving vibe that really just got under my skin and nestled there. Tommy Lee has a reputation of being over the top and I think that carries through into this disc as well. Songs such as “Fight Song” and “2 Ways” are hard hitting, big and in-your-face. Other tunes such as “Louder” and “Blame” are hook-oriented, hard rock songs that I’m sure will eventually end up in the rotation of many rock stations around the globe.

I think A Public Disservice Announcement really has something to offer just about every fan of hard rock/nu-rock. It is a well-produced, killer-sounding disc that I would not hesitate to recommend to others.  [ END ]