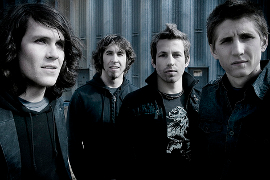 Remedy Drive vocalist David Zach and guitarist Dan Zach spoke with me recently after the band’s set at Kingsfest 2010. I was quite impressed with the band’s energetic and enjoyable performance in front of the nearly packed house despite the triple digit temperatures. While Remedy Drive is not your metal fare, there is something on here for just about everyone who is a fan of good rock and roll. Granted you may not be banging your head and snapping your neck, if you’re a fan of solid, well-written and well produced music, you’ll probably really dig this. Here is what the guys had to say about the band, the tour, their upcoming release and their humanitarian project The Hope Venture.

How is the summer tour going so far?
David: Good. We are doing a lot of festivals. Festivals are different, as you saw today and it makes you look forward to the future. Because there is always twice as many people in attendance for the band after you. But on the other hand we are really thankful to be sharing a stage with these bands. Michael Tate has been watching us lately and he has become a fan. You saw our set…the crowd seemed to triple from the beginning to the end.

Dan: It is kind of a big challenge when other artists start watching you.

David: You have to be on you’re A game.

The rain did not even seem to bother anyone.
Dan: No I wish it would have rained on me.

According to your website you are working on a follow up to Daylight Is Coming. When can we expect to see that?
David: Probably a year from now.

That far away?
David: Yes, we added on 3 songs to Daylight Is Coming and created an expanded addition; hopefully that will buy us some grace with our friends and fans.

Any sneak peak into the new material?
David: We are trying to kick some of our songs and we are pulling them with us live. I want songs that are pushing us forward live instead of us feeling we have to bring them with us. I want songs that make the live show better. We never thought about that on this last album…songs for the concert setting. So hopefully what you will get on this next album are songs that are great live and you can sing to them right away.

Sort of like anthemic songs?
David: I hope so yeah. We are going to try that.

Really, what is the writing process like then?
David: We are all over the place right now. We are writing with other people. We get these songs when I am in my living room playing a piano. I think I need to start writing the melodies and the lyrics when we are jamming in the basement. We need to get back to that.

Do you think about distinguishing performances and sounds from release to release?
David: Yeah. It is just gradual you absorb so much of what you see from all the releases and concerts we have seen.

Dan: I think we want a little bit less of a polished sound. A little edgier and a little closer to what people expect to see live…less cleaned up.

You guys are involved in something called The Hope Venture, Can you tell me a little bit about that.
Dan: The Hope Venture is a non-profit that we have started with some people in our church and it is a project based humanitarian endeavor. Our goal is to help people. There are a lot of big and great people doing a lot of big and great things to help people around the world and what we want to do with The Hope Venture is try to find people that are falling through the cracks…people that nobody else knows about and help them in terms of basic living necessities you know water, food and education. We are very big on education and children.

Is it targeted to one specific area of the world?
Dan: Right now a lot of our projects are in India. Mainly because we really want to be an organization that is about ownership and sustainability in the region. That comes though people on the ground that are local people and most of the local people that we know who are trustworthy and know what they are doing are in India. We would however like to expand to other countries in the future.

What other touring plans do you have after this tour?
David: We are going to do our own tour called the Guide You Home Tour.

Will it be across the country?
David: We want to really concentrate on where we have the most success. If you go from Ohio over and up. Ohio, Michigan, Illinois, Wisconsin, Indiana, Minnesota, Iowa, Nebraska and even down into Texas and up to the Dakotas. It used to be just the four states around Nebraska. When we were indie it was California, Nebraska, South Dakota, Minnesota and Iowa. Now it has kind of spread out. We still do not have too much going on in the south east. It is hard to connect the dots to get to California or Oregon.

How do you guys prepare for the physical demands of a tour?
Dan: I run a good bit.

Can you get that in on the road?
Dan: It is tough…especially when you have hot weather with uncertain shower conditions. I want to run a marathon though. I have run one in Memphis before and I have done a couple of half marathons before.

Any closing words?
David: This fall tour we are going to bring out more technology and more gadgets. Every Wednesday is open wall Wednesday where we talk to our fans we open our walls and answer their questions. Every Monday we have a new video. We have always wanted to do things that are interactive and the fans can be a part of. We want people to be part of this and enjoy it.  [ END ]