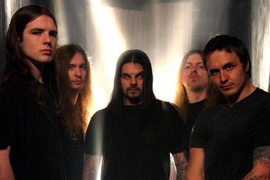 Brian Werner, vocalist for the Florida based death metal band Inferneaon, spoke with me recently about the band’s new disc, Genesis To Nemesis. This disc a brutal, monster of an album and one that fans of the extreme metal scene are sure to dig. The band even covers the Metallica song “Creeping Death” with a guest vocal appearance from none other than Oderus Orungus of the mighty Gwar. Here is how the conversation with Werner went.

Now that your brand new CD, Genesis To Nemesis, is complete how do you feel about it? Are you satisfied with the outcome?
Brian: Yeah I really am, I always knew in the back of my mind how it would sound. But watching it all come together brought some new surprises and different ideas that would eventually come out during the recording process just added to the ideas that we had all along. Brian Elliot at Mana studios just really did an amazing job capturing what we were trying to do without losing the integrity of us actually playing and making it sound too mechanical like so many recordings today are.

What was the writing process like for this CD? Did you guys all write together? How long did it take?
Brian: Yes and no. Usually Steven and Taylor will come up with a riff, record it to a click send it to me to start working out lyric ideas. Then they’ll send it over to Dave our keyboardist then go over to Jeramie’s and jam out the parts to start to put the arrangements together. It’s not like it was back in the day when we could all get together in a room and just jam. Now everyone is pretty spread out geographically, but it’s not that it’s a bad or negative thing at all it’s just different and personally I like it better more this time around anyways.

Give us some insight into the record Genesis To Nemesis and the meaning behind its title?
Brian: We really wanted to attempt to tell the story of the Bible from a more historically accurate and mentally sound point of view and strip it down to its basic form. Strip away the bullshit and look at it for what it really is… and that’s a lie. The Bible was written by the Council of Nicea in 600ad, 600 years after Christ died by a bunch of roman politicians; this is what people believe as valid? Not to mention literally every story in the bible was stolen from other pagan religions and perverted into Christianity (i.e. Christmas, Easter, etc.) all of these were old Pagan traditions that they turned into Christian ones as a way to control people. Like I’ve always said, Christianity has Pagan DNA!!!

What can fans expect when they pick up a copy of Genesis To Nemesis?
Brian: Just some good old school metal with a little bit of a new twist. We don’t come from this school of metal, we are the ones who, in the early 90’s when grunge was popular, we listened to Slayer and King Diamond. Then when Rap Rock became popular and it was cool to listen to anything but, we were listening to Cannibal Corpse and Morbid Angel. Then once the whole “hardcore” thing took over we were still listening to Kreator and Destruction. Now that it’s cool to be retro metal we still haven’t fucking changed at all! We are still listening to Slayer and King Diamond and that has never fucking changed from day one!

Are there any tracks that are personal favorites?
Brian: For me I love the music to “First of the Fallen” but lyrically I love “The Scar of David.”

You guys do a pretty killer version of “Creeping Death” with Oderus Orungus. How did that come about?
Brian: We were sitting around smoking a joint and we had been talking about doing a cover song, but it was hard finding one that fit the whole overall concept of the album. Also being that we tune to E standard we wanted to play something in the tuning to maintain the integrity of the song. Then once we thought of “Creeping Death” we had realized we didn’t have a song to cover the Mosses portion of story. So it really was a perfect fit, and Oderus just made it that much cooler to play too. I’ve been a GWAR fan as long as I can remember so it was just one of those “dream come true” kind of things.

What kind of touring plans do you have for 2011?
Brian: Well we are on a gargantuan tour right now with Mobile Deathcamp, Ourselves, The Casualties, and the Scumdogs of the Universe themselves fucking GWAR! This is one hell of a tour for us, it’s about 98 shows in just over 3 months, and 61 of those shows are with GWAR! We are working on putting our year together for next year, but we don’t plan on going home anytime soon. Our current goal is to play 250 in the next 12 months.

All of that passion that you play with must be tough on you physically. How do you prepare for the physical demands of a tour?
Brian: Nothing much really. I smoke a lot of weed to get my lungs ready for the extreme amount of smoking I do on the road. Especially for a signer, you need to build yourself up to the level of weed that I smoke on tour, you can’t just jump into it you need to work yourself up to it.

What artists would fans be surprised to find on your iPod?
Brian: I have a few guilty pleasures, Faith No More! Evergrey, Katatonia, I do like some industrial like Skinny Puppy, KMFDM, Ministry. I do have a few movie scores like Marco Beltrami and Tyler Bates. I like a lot of everything as long as it’s heavy and dark.

Tell me about a book or two that you’ve read that you think other people should read?
Brian: ‘The God Delusion’ by Richard Dawkings is fucking awesome, ‘The Book of the Law’ by Aleister Crowley of course. ‘Jesus Interrupted’ by Bart D. Ehrman is another great fucking book written by a Christian who passed seminary school and exposes all the bullshit from the Bible. Also, ‘God is Not Great’ by Christopher Hitchens is an amazing book as well.

If you had not become a musician what other career path would you have liked to attempt?
Brian: I love animals, so maybe a vet might have been cool. I would think it would be cool to work at a zoo; working with dangerous animals would be a fucking awesome job. I used to have a bunch of both poisonous and non-poisonous animals through my life and it’s a passion I’ve had since I was a kid. I also rescue Rottweiler’s at home and train them as well, so yeah anything with animals would be a great job. Especially for someone like me who absolutely fucking hates people, I’d much rather work with animals.

If you were a superhero, who would it be and why?
Brian: Batman, because Superman is a total fag, and at least Batman was more credible because he’s a real person, not some homo who undresses in phone booths and runs around in rainbow colored tights… fuck Superman he sucks.

What is the one thing you absolutely insist upon in your rider?
Brian: VODKA!  [ END ]