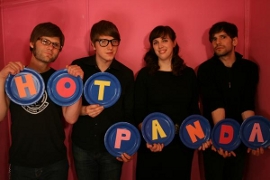 Chris Connelly, the lead vocalist and guitarist for Canadian act Hot Panda recently spoke with me about the band and their new disc, How Come I’m Dead? These guys play a brand of indie rock that is quite infectious and more than enjoyable to listen to. Here is how our chat went down and what Connelly had to share.

The name of the band Hot Panda is interesting to say the least and sounds as if there is a story behind it. Where did the name come from and what is the story?
Chris: Hot Panda was the fictional dish that could be served at this really bad Chinese restaurant in Edmonton. It was a joke that stuck, but it’s better than sweet and sour panda.

Now that your brand new CD, How Come I’m Dead?, is complete how do you feel about it? Are you satisfied with the outcome?
Chris: I’m very proud of How Come I’m Dead?. I think it’s a lot stronger than anything else we’ve put out. I like how it’s sparse and free flowing and at the same time, frantic and incredibly energetic.

What was the writing process like for this CD? Did you guys all write together? How long did it take?
Chris: This album was written very quickly. For most of the songs on the record I’d bring in a riff or a chord progression in a skeleton to the song then everyone else would chip in and put the meat on the bones until we had something that we were all happy with. Then there were songs like “Membership Fees” that somehow just took shape out of a jam, but it was done quite fast, we didn’t give the songs the time to get old and feel stale to us. They felt very much alive and still changing when we recorded them.

Give us some insight into the record How Come I’m Dead? and the meaning behind its title?
Chris: Over the past couple of years I felt like I’ve been constantly on the move and not spending anytime in one particular place. Either touring, being in Edmonton, or with my girlfriend in Toronto. There was a feeling of disconnectedness from the people and places around me. I felt kind of like being a ghost. I could go all over the place but not be rooted anywhere. So when the title “How Come I’m Dead?” came up, it instantly resonated. It was a great question.

What can fans expect when they pick up a copy of How Come I’m Dead?
Chris: It was recorded in a week with all of us playing together in the same room. Almost everything was recorded off the floor with very few overdubs. It’s a very energetic and creative album that is hard to classify or pin down. It will hopefully make you happy!

You guys have been on the road for most of 2010. I am sure you saw and experienced many different things you might not even have known existed. Are there any stories that stand out in your mind as being exceptionally strange or odd?
Chris: There’s a giant Don Messer fiddle outside of Fredericton New Brunswick! I know, I’m blowing your mind.

Can you think of any disastrous events that happened while out on tour? How did you solve the problem?
Chris: Our Van broke down in Waterloo, Ontario. We successfully found and purchased a new one in Toronto and it only took 2 days. Two incredible, long and frustrating days.

What artists would fans be surprised to find on your iPod?
Chris: Hot Panda. I actually spend lots of time listening and re-listening to the band I’m in. How uncool is that?

Tell me about a book or two that you’ve read that you think other people should read?
Chris: ‘The Grand Design’ by Stephen Hawkins. ‘Goodbye 20th Century’ by David Browne.

If you had not become a musician what other career path would you have liked to attempt?
Chris: I’d love to be physicist! Or a lawyer.

If you were a superhero, who would it be and why?
Chris: Batman. I like that he still gets to be a bit of an irresponsible jack ass when he’s Bruce Wayne.

What is the one thing you absolutely insist upon in your rider?
Chris: Rider? We rarely get those. I guess the one thing I’d ask for on the rider was that we got to have a rider. And a good one.

Any closing words?
Chris: Hot Panda is the best band in the world! That’s it.  [ END ]