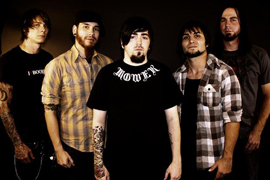 I recently spoke with Keith Finnell, guitarist for the Florida based metal outfit Ekotren. The band has just completed their sophomore release, The Dead Of Night and they are planning to take to the road in support thereof in the upcoming year. After listening through the new disc I feel it is a leaner, meaner and tighter package than their previous work, and one that should garner the band a ton of attention. Here is how the conversation with Finnell went.

Now that your brand new CD, The Dead Of Night is complete how do you feel about it? Are you satisfied with the outcome?
Keith: We are all more than satisfied with our new CD, The Dead Of Night. The band is so proud of the work we did, and the songs that were created. I personally couldn’t be happier with what came out of us and that we made a record I feel is far superior to our debut CD, Light The Fire.

What was the writing process like for this CD? Did you guys all write together? How long did it take?
Keith: The writing process for The Dead Of Night was an up and down experience. There were days where songs or ideas flew out, and days were we would work an idea until we decided it was garbage. We wrote a ton of stuff for the CD, but since we are all so picky when it comes to what we write and how our music is, a bunch of stuff got thrown away until we got our best. We write together musically, and Sheldon (our singer) writes the words.

Are there any tracks on the disc that are personal favorites or that have good stories behind them?
Keith: “The End of The Day” and” A Road to Nowhere” are two of my favorites. The first is a personal favorite because of the message behind it, which is basically – we are who we are, this is what we do. Our music is honest, and we don’t try to portray ourselves as something we’re not. “A Road to Nowhere” was the last song we wrote for the CD, and it came together really fast at our last day of pre-production. We had a song that was good, but was the weakest out of the batch, and we wanted to beat it. There were 3 other song ideas, and that was the first and only one we worked on. It came together in literally 45 minutes.

Many of your songs are so hard and intense that I am sure they translate well into a live setting taking on a whole new life in front of a live audience. How does it make you feel when the emotion and power that you envisioned in the recording studio, come to life while playing in front of a crowd?
Keith: It’s an amazing feeling to be in front of a crowd and having them dig what you are doing, moving and filling the room with energy. We do this for the chance to get to play on a nightly basis and to connect with an audience, so it’s very rewarding. Plus, the harder they go, the harder we go.

The name of the band Ekotren is interesting to say the least and sounds as if there is a story behind it. Where did the name come from and what is the story?
Keith: There really isn’t a good story to the band name. We would tell people it came from our original drummer tripping on acid and his mom walking in on him tripping, and the story would go from there, but in honesty we needed a name that nobody had, and we would search the internet to check names, and it seemed they were all taken. He came up with it and the spelling and we went with it. I wish the acid story was the real deal though, and then maybe we could seem cooler or something along those lines.

How much touring do you guys have planned in support of the record?
Keith: We plan to tour as much as possible, the ball starts rolling in full effect in January, and we plan to be on the road off and on for the next 12 to 18 months. It takes touring to get your band heard and CDs in kids’ hands, so that is what we will do.

When you are on the road for a while I am sure you see and experience many different things you might not even have known existed. Are there any stories that stand out in your mind as being exceptionally strange or odd?
Keith: Well, when playing in a band and traveling the country, nothing is too strange or odd. Every different encounter in an experience, and have definitely had our fair share.

When you are out on the road anything can happen and often does. Can you think of any disastrous events that happened while out on tour? How did you solve the problem?
Keith: We have had our near death’s driving through the snow and our tire blow outs and vehicle issues like all other bands out there doing it, but one of ours that sticks out would be following our GPS down a road that goes from gravel to 18 inches of mud in a rain storm. That problem was solved by calling AAA (which doesn’t cover trailers, so you’re screwed there) and eventually calling 911 to find someone to tow us a mile plus through the mud. The problem will be avoided in the future by staying on main roads, and not trusting a GPS in South Dakota.

What artists would fans be surprised to find on your iPod?
Keith: I listen to everything from The Who to Coldplay to Divine Heresy and Pantera. The Coldplay or Counting Crows may be a slight shocker. In my defense, Sheldon listens to Kelly Clarkson and Alanis Morrissette. You can’t listen to screaming all day and night, or sit in silence, so it’s cool to take in other styles of music and writing.

Tell me about a book or two that you’ve read that you think other people should read?
Keith: I’m not really into books at all; I have a hard time reading magazines. I haven’t read a book front to back in probably 10 years, nor do I remember what book it was. The new Keith Richards book looks pretty good, so I may pick that one up and see how far I get.

If you had not become a musician what other career path would you have liked to attempt?
Keith: I do electrical work in between tours, and it’s a trade that’s been in the family (my mom’s side) all the generations we’ve had electricity. If I wasn’t doing this, I would probably have done that. College wasn’t for me.

If you were a superhero, who would it be and why?
Keith: I would go with Batman. He’s crafty, and I dig his utility belt. If I had a utility belt, I wouldn’t let it leave my sight. Plus, Bruce Wayne has a good thing going for him.

What is the one thing you absolutely insist upon in your rider?
Keith: You’re telling me we get a rider?!?! Usually the cases of water are the clincher. Beer is great, but gotta have the water!  [ END ]