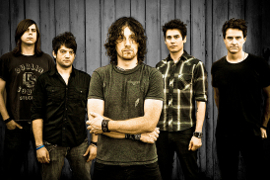 From New York City comes the five-piece rock group Edisun. The group is led by lead singer and frontman Ethan Isaac, formerly of the band Wooden and lead guitarist Jonathan Svec. The group came together after a meeting between the two after they realized that they both had very similar tastes in music. The result of their meeting and collaboration is Edisun’s debut album, released through EMI Records. The record was produced by Claude Villani, a long time collaborator and a very well respected producer in the industry. In its short time together, Edison has become particularly popular through performing for U.S. troops stationed around the world and the band also received some massive exposure on a recent tour with Smile Empty Soul. We recently spoke to lead singer Ethan to learn a little more about Edisun and their music.

You’re touring parts of the United States right now with Smile Empty Soul. What are your feelings on the tour so far?
Ethan: Oh it’s been great, we’ve travelled great distances, we started in Boston and then went all the way down to Florida, hit Jacksonville, Tallahassee and the Clear Water area of Florida. Then we headed to the Midwest and then all the way up to the northwest up to South Dakota, Washington State, Montana and then down into California so it’s been a pretty great tour in that way.

Smile Empty Soul has had quite a successful career in the rock n roll industry thus far. How did you get onto this tour?
Ethan: We’re signed to the same record label as Smile so we’re label mates so that’s how we ended up doing a tour with them. The owner of the label thought it would be a good match for us to go out together and he was right, it’s been a great time so far.

Are you finding you’re winning over new fans or are some of your own fans coming out to the shows?
Ethan: A combination of the two, we’re definitely winning over new fans every night, both bands are organic, authentic rock n’ roll music so as you know we’re very different stylistically and it works really well. Our song has been charting really well on the radio so we’ve been getting a lot of new fans too. We did a tour earlier this year with Everclear, Cold and NonPoint, we were out for a while with that so we’ve revisited a lot of those markets and we’ve noticed a lot of fans coming back now.

You’ve done a lot of touring actually for American soldiers overseas, including five stops in Iraq. How did you become so active in supporting and playing your music for the troops?
Ethan: Um, there was a song that I had written, I was right by the World Trade towers when they were attacked, it was a song called “Into the Sunlight” that had reflected that day, I was one of the last people to I guess evacuate or escape or whatever you want to call it, out of New York City and I had written a song about that day. It had gotten some online press and from some different newspapers and somebody from the entertainment division of the military actually had seen it and heard it and thought it would be interesting for us and for me to go do a tour overseas. It started out in Northern Europe and then it just went into doing a bunch of tours. We’ve been out for four or five years now. It’s probably the best musical experience the band has ever had. We’ve done twenty countries so far so the band has built basically a great name and a great career and you know, built a great record off of all those years of just working on our music, seeing the world and meeting tons of people.

Now how did the band Edisun originally come together and where do you take your name from?
Ethan: The band came together, I was introduced to our guitar player Jonathan by our manager and at the time he thought we would be a good match. Jonathan was in a band called Splendor and they thought it would be a good match for us to get together and start writing songs and immediately when we got together it just worked, there was just good chemistry there. And then someway down the line we came up with the name Edison, it’s really a spinoff of Thomas Edison and we just did a little spin on it by changing the “i” to a “u” and give it a more organic feel, something that is a little more our own.

Your self-titled debut album just came out. What are your feelings on the record now that you’ve finally released it to the public?
Ethan: Everybody is really excited, we were in Los Angeles the day and the night before the release, and the night of the release and it’s kind of a long awaited, anticipated record for the band because we’ve been so busy touring overseas that we haven’t really spent much time touring in the United States. We decided to really focus on getting out in the markets here and um, doing our music out here at home and then partway through the Winter we ended up getting signed by with FOF/EMI and um, we immediately went back into the studio and the record’s really a culmination of all our years of touring and working on this music into one great record so it’s a pretty special record for us.

How long did it take to record the record and how many songs did you take into the studio with you?
Ethan: There was probably about twenty songs that were taken into the studio and eleven pieces came out. The record took probably three months but like I said, it really was a culmination of working with producer Claude Villani over the last four years and all the touring that Edisun has done overseas. We’ve been very fortunate to have the experiences we’ve had and put them into our music and then you know, spend time working them out on the road and being inspired by the situations we were put in.

You worked with Claude Villani as a producer on your debut. Why did you decide to work with him? Did he just seem like the right fit?
Ethan: He’s been with the band since the beginning and we’ve been developing and writing music with him since the start of the band so this is kind of the final stop on the train so to speak. The band has been moving forward and he’s been behind us the entire time and you know it’s kind of finally come to the point where we were ready to release a record here and um, it’s happened in a very kind of organic and natural way.

What is the writing and recording process like in the band? Do you all write together or do you (Ethan) do most of the lyrics and song structure?
Ethan: Everybody’s kind of working as a collective in the writing process and um, there’ll be times when I’ll have lyrics prior to the music coming in and times when the music will happen first and the lyrics will come second. Like I said, the songs are really a culmination of all of our experiences overseas and all the touring and playing we’ve done so you know, it’s all kind of happened in a really unique way. A lot of bands don’t get the chance to do this for years, play songs, get a good reaction and go back and work on them again. We weren’t really looking for a record deal the years we were overseas, we were so happy to be travelling the world and doing what we love to do, we weren’t really searching for the “big deal.”

Do you have favourite songs on the album or a favourite?
Ethan: “Voices” is I think I’d have to say, to speak for the band our favourite song to play live and um, probably the most original track for us to listen to on the record. There are a lot of improvisational aspects that happen throughout the show every night and it’s different every night that we play. So it’s just great for the fans, they don’t know what to expect from one show to the next, some people that have seen us and then the song has changed since the last time they saw us so I’d have to say that that’s the one song that really sticks out and is a unique song to Edisun itself.

What are your more long-term plans like after this current tour wraps up? What can we expect from Edisun through the end of 2010 and the beginning of 2011?
Ethan: There are a lot of long-term plans. For this year we’re back out on the road, we’re doing a lot of set up stuff you know, interviews, acoustic performances, some TV performances to get the word about our record out now. Then we’re back out on the road starting October 26th in Kansas City, Missouri and then we’re all over the country once again from there all the way through the holidays, Thanksgiving and Christmas.

So any plans to get to other countries or continents?
Ethan: Yeah we’re going to do another tour for the troops in 2011, we’re not sure where yet but you know we’ve been talking to the Armed Forces entertainment and the people out there and they want to put us out on another tour so now that we’ve spent some time developing in the United States we’re ready to go back over there and do a tour. We’ve done some really crazy, remote spots in like Iraq, Afghanistan, Kuwait, Australia, Guantanamo Bay but you know we’re thinking about actually going to an Air Force Base in the northern part of Greeland, we were actually hoping to get up there. They’re really waiting for us and live music up there, they’re really remote and removed, there’s only a flight that goes in and comes out of there every ten days so it’s a good opportunity to get up there.  [ END ]