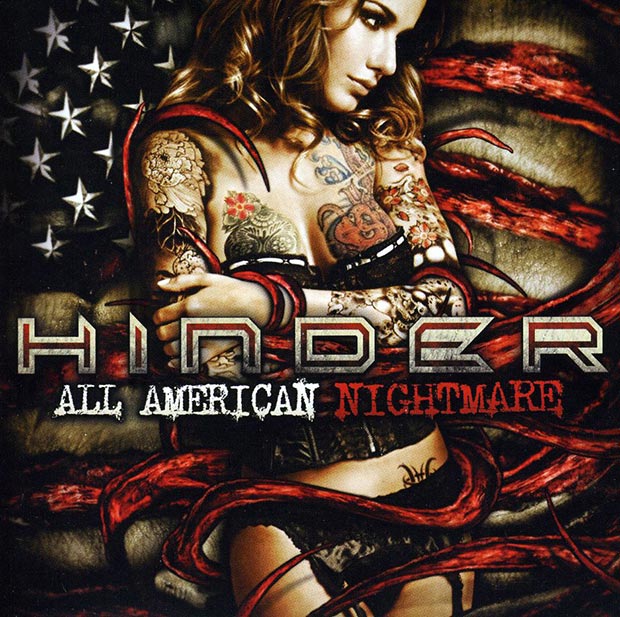 The Multi-platinum selling hard rock band Hinder are back with a new release, All American Nightmare. This is the band’s third full-length and I feel it’s a leaner, tighter, harder-rocking disc then their two previous albums. The very first track “2 Sides Of Me” works off of a great riff that sucks you right in and does not let go. It is a powerful song and one that demands to be cranked up. This is only the beginning though, from this point on the disc maintains the energy and intensity from song to song. I had to hear more.

The next song is the title track and the first single off the record and like I said, it gets better by the moment. “All American Nightmare” is gritty, ballsy and I fully expect it to be lighting up the radio request lines across the country. I listened through this disc a number of times before sitting to write this review and I honestly cannot find a bad tune on here. There are a couple of slower, what I would call balladesque tunes, but even those are solid and well-written.

I do feel however that the band is at its absolute best on the harder edgier tunes such as the opener “2 Sides Of Me,” “Waking Up The Devil” and “Striptease,” all of which are hard and heavy and showcase some really amazing guitar work.

I am also a fan of really good, really big productions and this one fits the bill perfectly. Even though the songs are gritty and edgy the overall production is sparkling and incredibly enjoyable to listen to. I honestly think All American Nightmare is going to be Hinder’s biggest record to date. Bottom line; this is a real good high-energy modern rock record that is well worth picking up when it’s released on December 7th.  [ END ]