Although the whole record is catchy, track number two, “Wrapped Up (in the Melody)” is definitely a highlight, which is no surprise considering three members of The Calamity are also in Army of Freshmen, a band which is no stranger to big singalong choruses. “Waiting for July” and “One of these Days” are again perfect platforms to showcase Owen Bucey’s charming lead vocal.

As the record begins to wind down, “45” has a more laid-back tempo, which contrasts brilliantly with the final track “Take Some Time” which is a perfect summation of the energetic piano-rock that is presented throughout the rest of the album.

This isn’t a super-high production album. While the sound quality is good, still present is that pleasing rawness that relatively undiscovered bands tend to have. The band members write and perform the songs with a joy that is evident in the music itself. I don’t want to sound totally corny, but – oh what the hell, everyone appreciates a little corn every so often, right? – Songs from the Gold Coast sounds like sunshine.  [ END ] 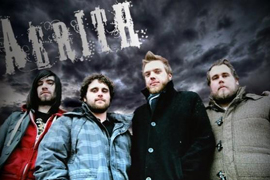