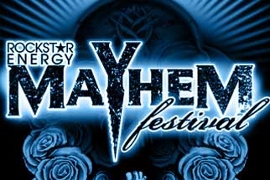 Being from a little town in Idaho, going to a big festival-type concert is a big deal. The aptly named Mayhem Festival made a stop in Nampa (near Boise) this week, and with a line-up that includes Chimaira, Hatebreed, Lamb of God, Korn and several other of my favorite bands, making the four-hour drive was not even a debate.

A veteran concert goer knows good sound. The way a band sounds live can make or break a live performance. Walking into the outdoor area of the Idaho Center the first thing I heard, besides the cheers and conversation of excited metal fans, was the music of Shadows Fall. And the sound was great.

The Mayhem Festival is set up with three stages, two second stages and a main. When a band would finish performing on one of the second stages, the band on the other second stage would start immediately, and I mean immediately. It was great to not have to wait for 30 minutes while the bands tore down and set up.

One of my personal favorite bands, Chimaira, was set to perform on the Jagermeister stage directly after Norma Jean. Mark, Jim, Chris, Rob, Andols and Matt played fan favorites like “I Hate Everyone,” “Resurrection” and “Power Trip.” Chimaira sounded great as well, and they have an incredible stage presence. Vocalist Mark Hunter encouraged the crowd to sing along, which they enthusiastically did, to every song. Lamb of God vocalist Randy Blythe joined Chimaira during “I Hate Everyone” to scream the chorus to the surprise of the crowd. One of the many great things about the Jager bands, besides the fact that they are Jager bands, of course, is that they each did signings shortly after their set. After a short wait in line, eager fans were able to meet the guys, have pictures taken and get an autographed poster.

Atreyu performed during Chimaira’s signing, then it was Hatebreed’s turn to take the Jager stage. If you have not had a chance to see Hatebreed live yet, make it a point to do so the next time they come to town. It is an unbelievable experience. No article about great metal frontmen should ever be lacking the name Jaime Jasta. There is something about the way this guy gets a crowd fired up. During their set, Jasta commented on how many families with children were in attendance, and how great it is that metal music can bring families together. One lucky little boy was even invited on stage with the band for the duration of a song. Hatebreed performed favorites such as “I Will Be Heard” and “Perserverance.” It was great to learn that Jasta’s hospitality toward his fans goes beyond the stage. During Hatebreed’s signing, he was eager to meet and chat with all the fans, even though security was trying to rush everyone through.

Once Hatebreed’s set wrapped up, it was time for the main stage heavy hitters to come out. Kicking things off was Five Finger Death Punch. At this point it became clear how many people really were at the festival as everyone congregated on the large grassy area in front of the huge stage.

Though I was nowhere near the front of the crowd, the sound at the main stage was also incredible. Very little echo, no feedback, and each word sang or spoken coming across the crowd perfectly clear. FFDP performed some of their fan’s favorite tunes, including “Bad Company,” (one of my favorite cover songs), “The Bleeding” and “Hard to See.”

Lamb of God followed FFDP on the main stage. At the cue of frontman Randy Blythe, the entire crowd, which I estimate to be more than 10,000, started to jump in unison, a truly awesome site. Blythe also dedicated the song “Redneck” to all the Idaho kids who drove to the show in their pick-up trucks. They also performed “Now You’ve Got Something to Die For” and “Set to Fail” from their newest release.

Rob Zombie was up next, and during the set up, a black sheet was dropped in front of the stage so that concert goers would not be able to see all the pyro goodies Zombie had in store for his infamous live show. And with giant dancing robots, fireballs, red smoke, large screens displaying bizarre retro footage only Zombie could find, the show lived up to rumors and expectations. Beach balls with skull decals were thrown into the stage to complete the dark “beach party.”

Zombie interacted with the crowd often, and if you did not know before, he has quite the sense of humor – just make sure you are on his good side! Zombie did not just perform hits from his successful solo career, he also performed the classic White Zombie hits “More Human Than Human” and “Thunderkiss ’65.”

Korn headlined the show, and the same black sheet shielded the eyes of the crowd for their set up. It was just getting dark as Korn took the stage, and, just in time, as they had an amazing light show. On either side of the stage was a large oil pump, a symbol of the recent launch of a boycott on British Petroleum.

Korn played their new single, “Oildale (Leave Me Alone)”, and several songs from the middle of their career including “Falling Away From Me,” “Here to Stay,” “Freak on a Leash,” and “Did My Time.” Just when it seemed they were going to ignore the beginnings of their career, the familiar beginnings of “Blind” began. “Blind” was followed by other oldie but goodies “Clown” and “Shoots and Ladders.”

Korn’s set ended just as quickly as it began. Vocalist Jonathan Davis did not interact with the crowd very much, but perhaps given the short set he preferred to perform music than speak to the crowd.

Overall, the Rockstar Mayhem Festival was an incredible experience. It was well organized and the performances were great. One difference between a festival concert and one which features only two or three bands is that each band’s set is very short. Thus they only have time to play the biggest hits and must ignore their lesser known but still amazing songs. It would have been nice to hear some of the hidden gems from all the band’s various albums. Check out video from the Boise show on the Mayhem Web site. The second half of the festival, the Rockstar Energy Drink Uproar Tour will start on August 17th in Minneapolis, MN. It will feature Disturbed, Stone Sour, Avenged Sevenfold and Hellyeah among others.  [ END ]

Check out the song: “Blind”