Guitarist Ryan Belcher from the band Framing Hanley spoke with me recently about the band’s sophomore release, A Promise To Burn. While the band has changed up their sound a bit from their debut, everything one would expect from a Framing Hanley release is accounted for on this modern rock record. The band is currently trekking across the United States with Transmit Now and The Veer Union. Here is how the conversation went.

How are you doing today?
Ryan: I am doing well. We are just getting ready for a show in Montgomery, Alabama at a place called Strange Days.

How far into the tour are you?
Ryan: We are bringing the first week of the tour to a close actually and we finally have a day off tomorrow. We are going to go back home for a day and hang out. So we are really looking forward to that.

How is the tour going so far?
Ryan: It is going good. We were off the road for about eight months so it was good to get back out here. We were all going a bit stir crazy sitting at home.

Did you find it tough getting your legs back after such a long time being off?
Ryan: I am not going to lie. The first couple of nights it was kind of rough getting back into the swing of things, but now it has evened out. We have been at this for quite a while and we just pick up right where we left off.

Now that your new CD, A Promise To Burn, is complete. How do you feel about it and are you satisfied with the outcome?
Ryan: I am really proud of it man, especially being the new guy in the band, I was not part of the first record. I just kind of jumped on board about two years ago and we did “Lollipop” and a few other songs and then went out on tour. I am really proud of the record, it means a lot to all of us and it is really cool the way people are digging it.

What was the writing process like for this disc?
Ryan: We all wrote it apart and somebody will come up with the riffs and we kind of just put it together piece by piece. We actually had about five or six songs.

Was there any pressure to follow up from your last record?
Ryan: We are comfortable writing. That is what I do everyday. I always try and sit down for a couple of hours and write.

So there was no real pressure then? You just kind of went at it?
Ryan: Not really.

What can the fans expect when they pick up a copy of A Promise To Burn?
Ryan: Rock and Roll! It is definitely a departure from our last record and I think that some people might be kind of confused for a second but I hope they will jump on board with it.

Are there any tracks on this disc that are personal favorites or that have good stories behind them?
Ryan: Well, all the songs on the record kind of have a story relating to one of the members in the band or someone around us. I would not call this a concept record but there are a few songs that tie together like, “The Promise” and “The Burn”.

You guys deal with a more serious subject matter on this record, especially in tunes such as “The Burn” or “WarZone.”
Ryan: You know how life goes, man. Sometimes you just can’t do anything. It seems that everything you do gets screwed over somehow. The most personal song on the record, especially for Nixon, is “Fool With Dreams.” He just had a baby about four months ago and it is a song about what is going to be best and what will make everybody happy.

Is there any meaning behind the title of the album, A Promise To Burn?
Ryan: Well a lot of it has to do with the whole business side of music and how the politics can really be crap.

What are the songs you get the best audience response to?
Ryan: Everyone really seems to really like “WarZone” it seems. “WarZone” and “Photographs and Gasoline” as well. “Photographs And Gasoline” is probably my favorite track on the disc.

Are you playing a mix of old and new tunes on tour?
Ryan: Yeah. We are playing mostly new songs with about four or five older songs mixed in.

What are your plans for the rest of the Summer?
Ryan: We have through mid-July booked right now with some really good friends of ours from Canada, The Veer Union. We are going to be out with them, Transmit Now and another band called Against The Wall. After that we are going to see what happens. We do not have any really set plans, we are just going to see what happens. We just want to try and play some shows and have a good time.

Any closing words?
Ryan: Listen to our music, take it for what it is and hopefully you will like it. Hopefully everyone that listens to it will take something from it and it will somehow better their lives.  [ END ] 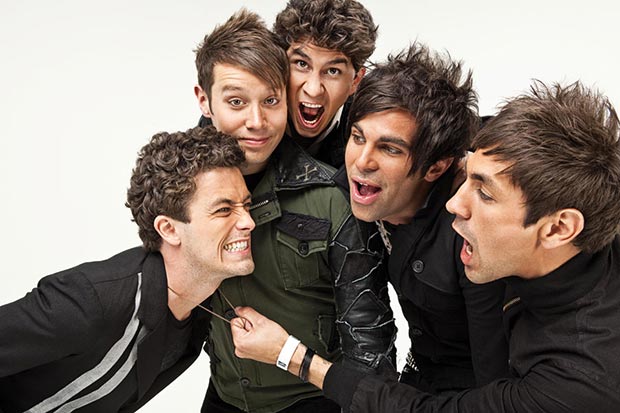