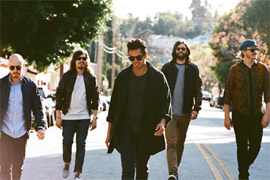 At 19:00 an expectant crowd queues outside the HMV Picture House and as the doors open, they filter into the venue, picking up drinks at the bar and settling in for three hours of Aussie brilliance.

Sarah Blasko is the only support act of the night and the 33 year old singer-songwriter from Sydney warms up the spectators perfectly. Blasko has been touring the world, promoting her third album, since last year and on this cool summer evening she fills the air with a strong, powerful voice, accompanied with brushed snares and a tuneful double bass. Blasko undoubtedly calms the atmosphere to one similar of a jazz club, but as the lights dim for the main act, a buzz is created once more.

The Temper Trap kick off with a strobe light-infested intro which raises the roof off the Picture House for the first time of the night. Lead singer Dougy Mandagi interacts with the crowd between every couple of songs and the confident front man powers through the set list with ease especially during singles “Fader” and “Love Lost”. His high pitch voice is one that is easily distinguishable and it shrills superbly around the old fashioned venue, but you cannot forget the brilliance of the other band members. Lorenzo Sillitto works the lead guitar and keyboard while Toby Dundas raises and lowers the intensity of the songs through his varied drumming skills. Jonathon Aherne however is the highlight as his bass glues the songs together and the man himself, slides his way around the stage with numerous head bobbing and bass swinging. Mandagi and Aherne are in their element and this transfers to the ecstatic Edinburgh crowd.

One of the highlights, as expected, is super hit “Sweet Disposition”, before the band close the set with their superb instrumental “Drum Song” which sees Mandagi pick up his own snare drum and he pounds away on the instrument that he used to play as a kid. It is an epic song and as the band filter off stage, the crowd beg the band to come back. They don’t disappoint as they re-emerge with a new song and other hit single, ‘Science Of Fear’ which is the final effort of the night, sending the sold out crowd home, very happy.

The Temper Trap have been touring for a long time since their debut album was released in June of last year and the thousands of people that have seen the band live, are hoping a second album will be in the works soon, because they have the potential to become an even bigger and better band in the future.  [ END ]

Check out the song: “Sweet Disposition”