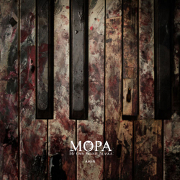 My Own Private Alaska – “Amen”

Classic piano infused with screaming and rhythmic drums make hearing My Own Private Alaska’s awesome debut Amen a unique musical experience. It’s hard to say what genre of music MOPA fits into because the sound is just so different. The classical music aspect found on Amen is so unexpected when you press the play button. Classical piano is seamlessly integrated into the metal and the result is a flow and dramatic feel to the sound. “Ode to Silence” is really good demonstration of piano amalgamated into the vocals.

MOPA puts heavy emphasis on the vocals in their musical style which includes a lot of dark vocal solos; the kind of things that remind me of soliloquies in Hamlet. The vocals make Amen really poetic and abstract and still give it its metal style. If MOPA used a style of singing that was really melodic and conventional it would totally change (if not ruin) their whole sound.

MOPA’s sound is definitely something that wouldn’t be to a lot of people’s tastes only because it’s so different. The title song for example encompasses every aspect of their music while “Ode to Silence” is one of their best songs overall. It took a couple listens for me to start enjoying this album and get a feel for the artistic style of the band. This said, I’m now very much looking forward to hearing more from them in the future. If only to see how their sound will develop over time.  [ END ]