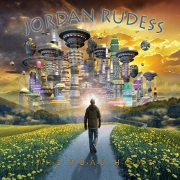 The Keyboard Wizard – a nickname given to Jordan Rudess. Having played in Liquid Tension Experiment and Dream Theater as well as having done guest appearances, Jordan has taken it upon himself to create a solo project under his own name. This project surrounds his keyboard and piano skills thus the nickname The Keyboard Wizard.

Being the progressive musician he is, Jordan has had many influences such as Genesis, Yes, Gentle Giant and King Crimson to name a few. To show his love for this genera he has put together unique arrangements of some of these classic prog tracks on his album The Road Home. The only Jordan Rudess original being “Piece Of The π”.

As I had said, this project revolves around the keyboard and piano. Jordan Rudess uses many of the skills he used with Liquid Tension Experiment and Dream Theater but with the advantage of not having to compete with anyone else giving him the full leeway of taking over and showing off his talent. Space sounds, keyboard bends and solos are what The Road Home is all about. The track “JR Piano Melody” features pure classic piano with no effects overlay. In addition to the keyboards are guitar solos by Ed Wynne, Bumblefoot, and Ricky Garcia. Drums are played by Rod Morgenstein throughout the album. The other great part of this disc are the guest vocalists. Neal Morse, Kip Winger, Steven Wilson, Nick D’ Virgilio and Bert Baldwin perform cameos which I have to say are PERFECT.

The first song “Dance On A Volcano” instantly drew me into the album. The vocals by Neal Morse are definitely perfect for covering such a great Genesis song. Also the guitar by Marco Sfogli is exceptional. It definitely stands up to the original. Every other track on this record is great and should be checked out by all.

The Road Home feels like a progressive rock history collaboration. The pioneers are sure to enjoy this release. Fans of Jordan Rudess will definitely dig into this album with the biggest of smiles on their faces. Fans of Genesis, Yes, King Crimson, Gentle Giant, Dream Theater and Liquid Tension Experiment will love this album.  [ END ]