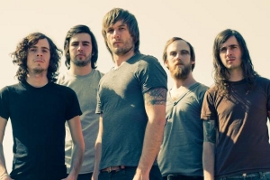 Interview with To Speak Of Wolves drummer Phil Chamberlain

Drummer Phil Chamberlain of the band To Speak Of Wolves spoke with me about the band’s Solid State debut, Myself < Letting Go. This CD has a more mature feel to it and I believe it is a natural progression from their previous EP. The disc seems to be more focused, a bit heavier and at times a bit more melodic, making it quite an enjoyable listen. The band has some big thing planned for the rest of the year including a tour with Becoming The Archetype as well as a possible stint in Australia. Here is what Phil had to say.

Now that your new CD, Myself < Letting Go , is complete how do you feel about it and are you satisfied with the outcome?
Phil: Man, I am super pumped about it. We actually started recording it last summer and then we got a new singer before we had tracked the vocals. The recording took place over a couple of months but yes, we are super stoked about it and cannot wait for it to hit the shelves and see what happens.

What was the writing process like for this CD?
Phil: It was a collective effort. We had a couple of the songs completely written, but probably more than half of the CD we just had just a collection of parts and we just kind of went into the studio and kind of out everything together and organized them into songs. It was really a good way to do because at the beginning we did not feel that we were attached to the songs being a certain kind of way.

What can fans expect when they pick up a copy of the disc?
Phil: Compared to our previous EP it is a lot more developed. I think it is heavier and more melodic and kind of runs the full spectrum between that. There is definitely a lot more singing on the record. The EP only had one line of singing on it.

What is the meaning behind the title of the disc, Myself < Letting Go.
Phil: Well it is actually Myself and then the less than sign Letting Go. It is a spiritual album but it is also kind of about getting past your vices and letting go of the stuff you should not be focusing on, the negative attitudes and stuff like that. If you are struggling with addiction or anything like that, you need to learn to put that behind you and focus on what is important.

Debut albums really define a band and making a good first impression in the metal scene is quite crucial. How did you not let that sort of pressure get to you while writing and recording the new material?
Phil: We were just really excited to be given the chance to write a record and record it for a label like Solid State so I don’t think we really thought about it too much. We just kind of let the material come out and we wrote music that we wanted to hear and not necessarily conform to a specific formula. When a certain band becomes popular a lot of other bands in the genre try to do that. We tried not to do that, we tried to basically write stuff that we like and the bands that influenced us. We tried to make that come through on the record and hopefully it does.

What are some of your favorite tunes on the record?
Phil: My favorite song to play live is called, “You Should Have Locked Your Doors Days Ago.” That is the song that we open with right now and it just went up today on Noiscreep.com. I like it because it kind of starts with some very chaotic guitar riffs and it moves into my favorite chorus on the album and it is also very melodic in the middle.

How much roadwork do you guys have planned for 2010?
Phil: Right now, we have a couple of tours planned for this summer. We will be going out with Becoming The Archetype and Onward To Olympus. We are still finalizing the summer plans and there is some talk of going over to Australia this fall so we are pretty stoked on that.

Any closing words?
Phil: I really appreciate you taking the time to do the interview and I really appreciate anybody that gives us even ten seconds of their time to listen to our music. If you like our music come out to a show and hang out with us. We would love to talk with you.