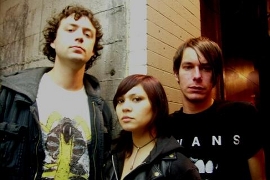 The Id Will Overcome is the sophomore release from the band The Abominable Iron Sloth. Justin Godfrey (vocals, guitar) and Andre Sanabria (drums, live guitar) chatted with me recently about this incredibly heavy, yet dark and gloomy record. The band describes their sound as “Old nihilistic punk rock, but doom.” However, whatever words you use to describe them the bottom line is that this is a brutal, unrelenting and pounding metal disc that is sure to please extreme metal fans everywhere.

The name of the band The Abominable Iron Sloth is interesting to say the least and sounds as if there is a story behind it. Where did the name come from and what is the story?
Justin: I just wanted a name that was ugly, heavy, and slow. So I took a bunch of synonyms for those words until I pieced the sweetest name together.

Andre: From what I understand, Justin knows the entire story. All I know is, if you find a giant sloth frozen in ice and you bring him back to life, outfit him in iron armor and think he’s going to be your pawn for defense, you’re kidding yourself.

Now that your brand new CD, The Id Will Overcome, is complete how do you feel about it? Are you satisfied with the outcome?
Justin: I feel pretty good about it. It took way longer than it should have for various reasons, but I feel like these songs are a little more well written and slothy. Plus we didn’t record it in a garage studio this time.

Andre: Asking an artist how they feel about their work is rather backhanded. Should they answer too grandiose one gets a sense of pomposity. If it is too self-loathing and negating, we wonder why we should even pay any attention to it at all. To answer your question. The album is finished. I wish we had more time to record, but then that would have just made for a longer album, and we in the band have musical ADD.

What was the writing process like for this CD? Did you guys all write together? How long did it take?
Justin: I actually started writing some of these songs as far back as 2005, but we were mostly inactive as a band until late 2008. I had moved to Vancouver, WA so I was no longer playing with the Willhaven guys and trying to find substitutes for them was pretty difficult. I recorded an EP with a couple guys in 2007, but they didn’t quite grasp the style of the band and the end result didn’t sound like Sloth, so I never released it, as I didn’t want to put out an inferior product. Andre started learning the drums for Sloth after I was laid off in 2008, and we booked a US tour as a 2 piece. The rest of the songs we wrote with Aubrey after we got back from tour, and we recorded in Louisville with Chris Owens of Lords.

Andre: Some of the songs Justin had written before he and I started playing together; some came to be full songs in my bedroom, fully imagined while on our last US tour. The rest were written in the studio.

Give us some insight into The Id Will Overcome and the meaning behind its title.
Justin: I guess I just maintain a fairly bleak view of humanity. We feel like we have evolved so much since the Stone Age, but under the surface we are still just animals grasping for the things laid before us. Humans in desperate circumstances become a different beast entirely. Maybe I’ve just watched the Road Warrior one too many times.

Andre: Read Sigmund Freud… living only to attain pleasure and at any cost, seeing no need for justifying ones actions… It’s almost libertine.

Every band has its musical influences. What are some of the bands and artists that have greatly influenced you guys and your music?
Justin: Most people think of us as a metal band, but really I look at us as a pop band trying to write the heaviest songs possible. Training for Utopia and Willhaven were the bigger metal influences on me growing up, but I’d say The B-52’s, Zeppelin, Nick Cave, Far, and Nirvana are probably more the structural and lyrical basis for the band.

Andre: I know we (in the band) all listen to very different things. I myself am influenced by Erik Satie, Igor Stravinsky and Richard D. James, even Trent Reznor. I have always preferred Slayer over Metallica. Nothing really influences me to write music for The Sloth, at least with regard to other bands or musicians. It is more cathartic than that. I think Justin and Aubrey feel the same. I like shit abrasive and heavy. If one person listens to something I like and immediately likes it too, I consider them suspect.

Are there any tracks on this disc that are personal favorites or that have good stories behind them?
Justin: I think “Mongoroid” and “Two Black Helicopters” are probably my favorites. We carved them out in the studio based on a handful of riffs that I’d had floating around for a while. I guess they sort of arose out of eating twenty white castle hamburgers a day, and smoking trashy east coast weed out of a milk carton gravity bong.

Andre: I like the songs with guitars and bass in them. Justin and Aubrey are incredible musicians.

Give us some insight into the album lyrically. This is a super pissed off sounding record.
Justin: I generally write lyrics one or two lines at a time, and slowly piece them together into songs over a long period of time. For this CD I had to write the lyrics for several songs at the last minute and it was a bit of pressure. I stayed up late a few nights watching infomercials and writing down all the shit that came through my head.

Andre: Why shouldn’t it be? If you want saccharine sweet bullshit, listen to commercial radio. We hate stupid people, ugly ones weird us out, religion is the most vehement creation on the planet. The best thing to happen to humanity, art, science and culture was the onset of the Black Death in the mid 1300’s. There is no room for posturing in this band, or in our lyrics. There isn’t much insight, read them, they’re pretty self explanatory.

Andre: Nihilism. If you suffer from depression and it’s banality, it will serve as a tool to understanding that you are not alone.

What is the toughest lesson you ever learned in the studio and on the stage?
Justin: Don’t tour the Northeast in January. It was even worse than it sounds on paper. We both ended up sick and stranded and that shit is no good.

Andre: To have your shit ready when it comes time to record. Same can be said when you are onstage, only people are watching you. It isn’t so much a lesson as common sense really. Also, reverb can be your friend. I wasn’t always quick to grasp that concept.

All of that passion that you play with must be tough on you physically. How do you prepare for the physical demands of a tour?
Justin: I personally do a bit of working out a few times a week which keeps me in decent shape. I also haven’t been drinking for a year either so the weight lost from that alone has made things a lot easier.

Andre: Pain killers and alcohol. Marijuana, but only medicinally.

How much roadwork do you expect to be doing in 2010?
Justin: At least 3 months worth. Hopefully after this US tour we’ll be able to piece together something for Europe.

Andre: We booked this, our second US tour, to support the record. We have been invited to head over to Europe and we might if finances fall into our laps or enough copies of the new record sell. We have every intention to tour as often and as long as possible.

Andre: Read Arthur Schopenhauer; stop using religion as a crutch. It is 2010; there is no need for faith anymore. Tell the ones you truly love, that you do. It means so much more coming from someone who hates everything.  [ END ]