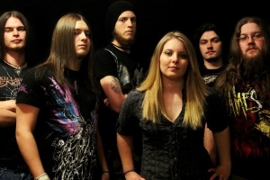 Matt Newton, vocalist from the band Society’s Plague chatted with me recently about the band’s newest release, The Human, The Canvas. The combination of blistering guitars, powerful and at times melodic vocals makes this disc is an exceptionally heavy, tremendously powerful metal album that kicks some serious tail. I listen to many discs on a regular basis but this is one stands out to me as being a cut above the rest. Here is what Newton had to say about the band and their new CD, The Human, The Canvas.

Since this is your first interview for PureGrainAudio, can you introduce the band and tell us how it all got started, that kind of thing?
Matt: Of course! We have myself Matt Newton doing vocals, Joe Royer on guitar, James Doyle (aka JD) playing drums, Roger Clem on guitar, Mike Smith holding down the bass, and Kate Latham on keys. Society’s Plague started a long time ago in a galaxy far far away… in Lexington, Kentucky. We had a dream, and we decided to chase it, music has been a big part of all of our lives so we really started Society’s Plague to give something back to the local music scene. Before we knew it the shows got bigger, the stages got bigger, we had a record deal and now we are having contests with Revolver Magazine, and heading out on tour with national bands!

Now that your brand new CD, The Human, The Canvas, is complete how do you feel about it? Are you satisfied with the outcome?
Matt: We are all stoked about the album we think its some of the best tracks we have laid down so far. But, there is always something you think about changing, or turning up, or re-do, as an artist we never really feel like our work is finished. It definitely represents us, and what we want to accomplish musically however and that’s what we always set out to achieve.

Different groups have unique ways of writing their songs. How do you guys go about writing your music? Is it a collective effort or is it more the efforts of one particular member of the band?
Matt: Music writing is something we all like to participate in. We are all influenced differently and it’s important that all of us add what we like to the music, that’s what we feel sets us apart from our peers.

What is it that gave you inspiration when writing the lyrics for this CD?
Matt: Everything, The Human, The Canvas is a reflection of how I view the world and the people in it. I have always been big into standing up for yourself and your beliefs no matter what they are, and that is what this album is about, being an individual. Take your dreams and run with them, don’t let anyone or anything stand in your way.

When you began to write The Human, The Canvas, did you have a preconceived idea of what you wanted the record to sound like and what you wanted it to achieve, or did that just come about naturally?
Matt: We knew what we wanted but we never try to set expectations. We just go in and do what we do, half the fun of recording and album is adding in new ideas and trying out different things. Ben Schigel and Tony Gammalo helped us out with some new ideas when we were recording at Spider Studios in Ohio. With recording credits like Drowning Pool, Chimaira and Walls Of Jericho, it is safe to say they had some great ideas. But over all we always keep an open mind musically.

Every band has its musical influences. What are some of the other bands and artists that have greatly influenced you and your music?
Matt: There’s far too many to mention all of them. We all have our own unique influences but I would definitely say bands like In Flames, Iron Maiden, Bad Religion, Chimaira, Soilwork, and August Burns Red are some of the ones we all have in common.

Many of your songs are so hard and intense that I am sure they translate well into a live setting taking on a whole new life in front of a live audience. How does it make you feel when the emotion and power that you envisioned in the recording studio, come to life while playing in front of a crowd?
Matt: That’s a good question, there’s really no way to describe it. We have sacrificed a lot, and put a lot of hard work into this and when you’re up on stage and the crowd is screaming and dancing it really bring everything full circle. There’s nothing in the world like it.

What are some of the songs you get the best audience response to?
Matt: To date I think the best crowd response goes to “A Better View on a Bitter World.” It is a fast, heavy and melodic song, so there is something for everyone in it. We start our set a lot of times with it and without fail there is almost always some kind of pit that opens up. But with The Human, The Canvas coming out we should have several more songs that get the pits moving!

How much roadwork do you expect to be doing this 2010?
Matt: As much as it takes. We have dates booked starting on June 1st until June 18th, and then we will be hitting the road with a tour package with bands from Victory Records, and Static Age Records. We have also been added to some East Coast Festivals this year. Stand and Deliver Records has some stuff in the work for us in August too, so keep your eyes open for a Society’s Plague show in your area.

Are you looking at any particular bands you will be touring with?
Matt: We would love to tour with anyone honestly, but if we had to pick one it would definitely be In Flames… Hopefully they’ll read this and contact us.

What does the future hold for you guys as a band?
Matt: The Sky is the limit! We are talking to some managers now, and some new sponsors, we would really like to be sponsored by the International House Of Pancakes, that would be a dream come true for all of us! We have some contests coming up and we will definitely be doing a lot of touring, a lot of promoting, and very little sleeping!  [ END ]