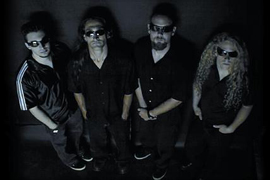 Klank vocalist and guitarist, Daren “Klank” Diolosa, recently spoke with me about his band’s newest release, Numb Reborn. The band is back in business after an extended hiatus and their new disc is nothing short of phenomenal. Their unique blend of aggressive, industrial metal and electronic grooves has a way of seeping under your skin. I have been a fan of Klank for many years now and it is good to see them return with such a solid offering. Here is what Klank had to say about the new disc and the plans they have for the rest of 2010.

Many of your songs are so hard and intense that I am sure they translate well into a live setting taking on a whole new life in front of a live audience. How does it make you feel when the emotion and power that you envisioned in the recording studio, come to life while playing in front of a crowd?
Daren: Man it’s a feeling that you really can’t describe with words. Something that you worked so hard and diligently on and could envision playing live at the time you were recording it. Certain aspects you can just picture how it could come across live and what an impact it can make. When it comes to playing live, you have to connect with the crowd. You have to feed off each others’ energy and that is exactly what we all do. When the lights go out and we hit the stage, I am giving it 500% and everyone I am making eye contact with knows it and can feel it too. Then we in turn feed off the crowds’ energy. They fuel us just as much as we fuel them. It is kind of like an unspoken understanding that we have with each other. We’re really lucky to have such an intense connection with our listeners. It’s awesome and none of us would trade it for anything!

Every band has its musical influences. What are some of the other bands and artists that have greatly influenced you guys and your music?
Daren: That’s a tough one only because there are so many different bands that we like individually and collectively. Definitely Type O Negative, God lives Underwater, Stabbing Westward, Life of Agony, Machine Head, Kings X, Kansas, as well as bands like Testament, King Diamond, Dokken and Alice Cooper.

Now that your brand new CD, Numb Reborn is complete how do you feel about it? Are you satisfied with the outcome?
Daren: Yeah bro we are really pleased with the outcome. I think it shows how we have progressed as songwriters as well as engineers and producers. These are definitely strong songs that we feel are a good representation of us. Sonically we think it’s kick ass and were all really proud of it.

What was the writing process like for this CD? Did you guys all write together? How long did it take?
Daren: We all had come up with ideas individually and demoed them out and shared them with each other to see what we thought about them and what we might be hearing that we could add to or expand on. Some stuff we had actually written together in the past just jamming or sitting around bouncing ideas off each other.

You recently released this CD as a digital download only. What was the reason behind that and how has the response been so far?
Daren: To be honest it’s a lot less overhead to worry about initially if you don’t have any actual label backing or support. We are going to have hard copy CDs in about a month or so. Doing it digitally at first kind of gives us a bit of a buffer or cushion because we can offset the cost of CD manufacturing a bit by using the income from the downloads. Essentially it is less to come out of our pockets individually.

Give us some insight into the album lyrically. This is a super pissed off sounding record.
Daren: Well yes and no. It is definitely aggressive at times but it goes much deeper. We have always described our lyrics as being relatable because they’re based on real life, how we see it and how it affects us. Basically, our lyrics are like a page taken out of a journal or diary, but set to music. There is actually a lot of positive stuff as well. Songs like “Don’t Count Me Out” are all about perseverance and endurance. Yeah I might be knocked down at times and I get bruised but don’t count me out. I am not giving up, so don’t give up on me. We all do what we gotta do in order to survive and that song is kinda like me thinking out loud about it. The struggle, the drive, the inability to give up and throw in the towel.

“Blind” is another one. It is about taking a good look around at what is going on in today’s day and age. We all endure some pretty crazy things in this life but we can’t ever let it get the best of us. We all falter at times but we’re smart enough to see where we are making the mistakes or when we need to make the effort to rectify whatever it is we are going through. But only if we all just really take a good look without the blinders on.

What can fans expect when they pick up a copy of Numb Reborn?
Daren: They can expect fifteen tracks of the classic Klank sound. They can expect to not be disappointed by a straight up, in your face, guitar driven, aggressively heavy, electronic masterpiece. We basically do what we always said we wanted to do. We bring the Mosh Pit to the Dance Floor!

The artwork is quite amazing. How is it tied to the album’s title?
Daren: The actual picture, without the text, was the original back cover art of the Numb release in 2000. That is where the bulk of these songs were originally released. Being as we had fully re-recorded everything down to the programming it was definitely a rebirth. We figured it would look cool and actually be really cool if we used the original back cover art and expanded on it a bit. We think it looks pretty kick ass!

What is the toughest lesson you ever learned in the studio and on the stage?
Daren: Anybody can record an album and make it sound good on a CD, but can you replicate the same feel and intensity in the live setting? Many people fall short in this area and we have always striven to give the listeners the most high energy, really intense live show. We have gotten a good reputation for tearing it up live and it is what they come expecting to see, so we do not intend to let them down. Alice Cooper said it best and it’s words to live by… don’t bother to put out on an album what you can’t do live!

Numb Reborn comes to us by way of Fixt Records. Are you happy the way they handled the record, regarding distribution, marketing and promotion? How has the label been accommodating the band’s needs?
Daren: Well we have a distro deal with them. We’re not actually signed to the label division but we were eager to work with them. They have made a name for themselves and have a really loyal following so it is a win win situation for both of us. I know Jimmy at Fixt is big on constantly providing updates, posts and blogs as to what’s new with them and utilizing their followers’ loyalty in helping spread the word.

Did you notice any difference with the other labels you have worked with over the years?
Daren: Well the last label that we released Numb through in 2000 was a definite eye opener for us. We had a sweet deal that should have made us a respectable amount of money if they kept up their end of the contractual agreement. We handed them a finished master complete with art and everything and being as we did it all ourselves and paid for it all ourselves and got no advance whatsoever from them, the per CD royalty rate we worked out with them was really awesome. Sad fact is, we sold a lot of CD’s through them and did not ever receive a single penny. Legally he’s not even supposed to be selling the original Numb any longer through his site or online sites like iTunes, but he still is. That was a big motivation for us to come up with the concept of Numb…Reborn and actually have a chance to make some money off those songs and cut him out. It is definitely cool what Fixt has going on these days and were happy to be a part of it. They have been nothing but cool and were really willing to work with us. As far as we know Numb…Reborn has been selling pretty steadily and for that we are thankful.

Any closing words?
Daren: We are looking forward to playing out soon and getting a chance to see people again. Please visit our band page. We have over 30 songs in the music player there as well as videos too! Please download the new Klank release NUMB.Reborn at www.fixtstore.com/klank.  [ END ]