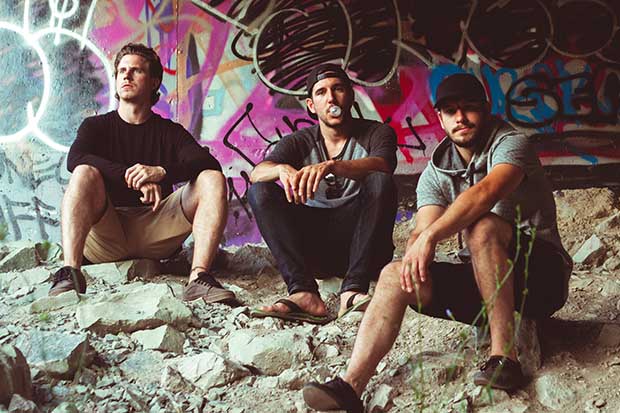 Pop Music with a chip on its shoulder is the way frontman Dustin Dopsa describes Taste Test, the newest release from his band, Final Thought. However you describe them though, the tunes on this disc have an almost post-punk sound and are full of great big choruses that will have you singing along in no time at all. Dustin was kind enough to answer a few questions about Final Thought, their music and what we can expect from them in the coming months.

Now that your new disc Taste Test is complete how do you feel about it? Are you satisfied with the outcome?
Dustin: Absolutely. Taste Test is definitely the most accomplished piece of work we have realized as a band. The idea behind the music is a lot more focused and the musical direction is a lot more concentrated. We really wanted to define what “Final Thought” sounds like with this release and I think we did a good job.

Could you tell us where the name Final Thought comes from?
Dustin: The name doesn’t really have a cool meaning or story behind it. When it came time to enroll into the battle of the bands with my acoustic songs back in grade nine, I did not want it to just be called “Dustin Dopsa” so I needed a name. After a couple days of thought, I woke up in the middle of the night and thought of the name “Final Thought” I wrote it down and it’s been set in stone even since.

Every band has its musical influences. What are some of the other bands and artists that have greatly influenced you guys and your music?
Dustin: Blink 182 is the reason that I had any interest in music or starting a band, so they are a huge part of my life musically. I really enjoy U2 and respect the impact they have had on the music industry for more than thirty years. My iTunes catalogue is endless and I like pulling influences from everything. You can always learn something from another good songwriter, no matter what the genre.

If you could jam with any famous musician, dead or alive, from any century, who would it be and why?
Dustin: Tom Delonge (Blink 182, Angels & Airwaves) hands down. Not so much for his musical ability, or even to jam, but to sit down and write a song with him or even just have a conversation would be life changing for me.

How have MySpace, Facebook and the internet affected your band and do you think downloading helps or hinders the artists?
Dustin: MySpace made it possible for every band to have a website, which allowed Final Thought to grow as a band. Facebook has now adopted a similar idea and it is a great way for the band to be able to communicate with fans. Downloading can be positive and negative but technology now allows it to happen and as much as labels and certain bands try to fight it, it is really never going to be stopped completely. I think bands need to instead use that same technology to make it easier for their fans to access that music for free. The more people that like your band, the more people will come to shows and purchase your merchandise. Final Thought currently has the newest single “Tell All Your Friends” available for free download on the FT website.

What can fans expect when they pick up a copy of Taste Test?
Dustin: You can expect to find yourself singing along, and that’s a promise. It is definitely pop music, but it is pop music with a chip on its shoulder. The songs are edgier than any other pop rock I have heard before. With Taste Test, we tried to find the perfect mix between pop music, heavy rock and neat programming. If Blink 182, U2, and Underoath somehow made a baby, and you dressed that baby in electro-rock programming, you would have something that sounds a lot like Final Thought and Taste Test in particular.

When playing together and ultimately recording this CD did you find that you could express yourself creatively enough?
Dustin: Totally. We spent a lot of time planning, discussing and thinking, about every little aspect. The songs went through more stages than they ever have before; it was definitely a creative process. “Wrapped Around Your Finger” was in a state of flux for more than three or four months, the arrangement in the song probably changed upwards of twenty times.

When you began to put this album together were you concerned at all about commercial success?
Dustin: No. Although it is a pop album, we really did not and still do not do things that way. FT makes music that we love playing and that we can have fun playing.

What is your musical background?
Dustin: Homegrown! I have never had a guitar lesson and I only recently took a couple of vocal lessons. I am not opposed to learning but that kind of musical schooling never really interested me. I took interest because I loved the music, and I think that if I were forced into playing something early on I probably would have lost interested. My grandfather was a musical mastermind though so maybe it is in my blood. He was unbelievably talented, classical guitar being his specialty. R.I.P. Grannnpy.

What has been the most memorable moment of your career so far?
Dustin: Playing a private showcase for Gene Simmons was definitely something none of us will ever forget. Meeting him and having him sit you down and give you advice about your band was monumental.

What is next for Final Thought?
Dustin: Final Thought is continuously writing and is working towards the release of a full length record. The songs are only getting better and I do not plan to stop writing at any time soon. Touring plans are in the works for summer 2010 so keep your eyes peeled for Final Thought in your city. Check our websites for daily updates!