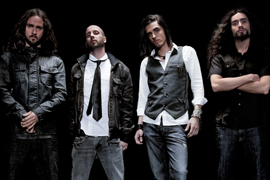 Abused Romance is an up and coming melodic rock act from Los Angeles that is a textbook case of a hard working band getting what they deserve. Through good old-fashioned grassroots work, the combo has secured a deal with Freeway Records – a label that will be distributed through Universal Music Group. PureGrainAudio recently spoke with Abused Romance vocalist and guitarist Meir Yaniv, and asked him what the key to the band’s early success has been.

Though the members of Abused Romance hail from Israel, you made Los Angeles your headquarters. How tough was the cultural adjustment for you guys?
Meir: It was probably the most fun part for us in the process of moving! It is like watching a movie for many years and then being in it. Israel is very culturally influenced by the USA so we were exposed to American music, movies and television from a young age, the culture shock wasn’t too intense. The difficult things were always the small things like naming the veggies we wanted when standing in line to order a sub (the pressure is on!), not understanding what “Salvaged Title” means when we bought our first car… (Ouch!). But all and all we love being fresh Angelenos.

Is it hard to juggle the band commitments and a regular day job? One would imagine you’re up late at clubs promoting the band.
Meir: It is definitely a challenge. Being in a band is just like owning your own business. There are no set deadlines, you don’t get fired or have a boss to answer to. Everything is done by you for the first few years plus the additional job that needs to be carried in order to support the new business you have going. The big plus here is that we do what we love so the price is very small because the process is so amazing. It is an insane trip.

How competitive is the local music scene? Is there any sense of camaraderie between the bands?
Meir: Los Angeles has an extremely competitive local scene. On the Sunset Strip alone there are over 20-25 bands performing every night but there is a great vibe going on, bands share the same road and experiences together so most band are very friendly to each other. The fact of the matter is, this is a competition, it is my band or your band who takes it to the top. Personally, we love the challenge but it is all being done in chill Los Angeles way here at the sunny state.

Did you follow any other band’s formula for success? I don’t mean musically, but rather the steps maybe another artist took to get their foot in the door.
Meir: Absolutely. We learn from every band that made it. There is no “hand book to success” in music, every band makes it in a different way but every band does at least something right. We prefer avoiding unnecessary mistakes and getting a tip here and there then shooting in the dark.

Did any other musicians or music industry veterans help you out with advice?
Meir: Yes. When we came to Los Angeles we took the guerilla approach and hit the city from every angle – online, shows talking about the band 24/7 and hitting the streets. We were fortunate to meet Kent Jacobs (Akon, Kiss, REM) on the Sunset Strip while we were handing CD’s. Kent fell in love with Abused Romance and introduced us to his partner Russ Regan (former president of Motown Records, 20th Century Records and more). Russ and Kent soon became our management and helped to get to where we are today.

How important has the online component been to your early success? Is MySpace still relevant for a band that’s just starting to get their name out to a wider audience?
Meir: Online is the best way to get new fans period. It is a huge privilege that today we are able to touch people with our music with the click of a button. We got a large portion of our following here in LA by sitting down for 4-6 hours a day talking to fans on MySpace. I gotta tell you though; some of the girls on MySpace don’t look like their profile picture when they come to their show!

Back in the older days, unsigned bands used to go out and hand out flyers and do the face-to-face thing with the public. Does anyone still do that?
Meir: We don’t do that anymore, but we did it about 3-4 times a week for about a year on the Sunset Strip and I can honestly say it is one of the most important components in our success so far. It’s not that hard guys! Just go get a drink as usual and spend half an hour before you get in and half an hour after you leave in front of the club handing CD’s and flyers. Promo CD’s are actually better because people go back to their cars and play your CD. We used to print CD sleeves with our next show details on it so people have the music and the next show details, worked like a charm.

What has been the most frustrating aspect of playing in Abused Romance up to this point? Did the daily grind of being unsigned and hustling ever get to you?
Meir: We were always very determined to go to the top. When we were unsigned we worked as hard as we work today and from our experience the hustle in the music world never ends. When we recorded our debut album Shine we worked with world famous producer Justin Gray (Joss Stone, Amy Winehouse) and Mixer Randy Staub (Metallica, U2) and I can tell you that we all had to hustle, the band and them. It is the nature of the art business; you have to love it if you want in. For us the most frustrating thing is the 15 hour flights to Israel, you can watch 2 movies, sleep eat twice and you still have 8 hours to stare at the window.

Tell us about Freeway Records and how you hooked up with them.
Meir: Freeway Records is a new record company formed by Russ Regan and Kent Jacobs. The label id distributed by Bungalo/Universal Records. The hookup? Thanks to the Sunset Strip! After meeting Kent on the Strip we invited him to a Hollywood show at a club called King King. He was blown away and he brought his partner Russ Regan who is one of two men in the world that sold over a billion records. They both came to see our following show at The Viper Room. They both got Abused.

When can we expect to hear your first album for the label?
Meir: Our first album, Shine, will be released in a few months. The first single “Hit and Run” will be hitting the radio in about 6 weeks and can be heard online right now. This album is exactly how we wanted it to sound – melodic, huge sounding, rich and epic.

What advice would you give all of the struggling musicians reading this?
Meir: Our best advice would be to work as hard and as smart as possible. The first component is hard, what is working hard? The answer is simple – MANY HOURS. The more hours you put into your band the better songs you’ll have and the band will sound better and tighter live. We rehearse at least 4 times a week and it gets as crazy as 12 a week (twice a day). Even if the members are beat from working all day, spit some extra blood and hit your lockout again for another set at 11PM, and YES!, wake up 4 hours after for your day job. Smart? Create schedules, goals by date and have weekly band meetings so you guys can see where you stand in the business side of it. It is called the music business for a reason;) and lastly, make sure you get better all the time and shoot for the best – compare your songs and your band to the biggest bands in the world because if you want to take it down, you will have to stand tall next to them. Good luck guys! Much love from Abused Romance.  [ END ]