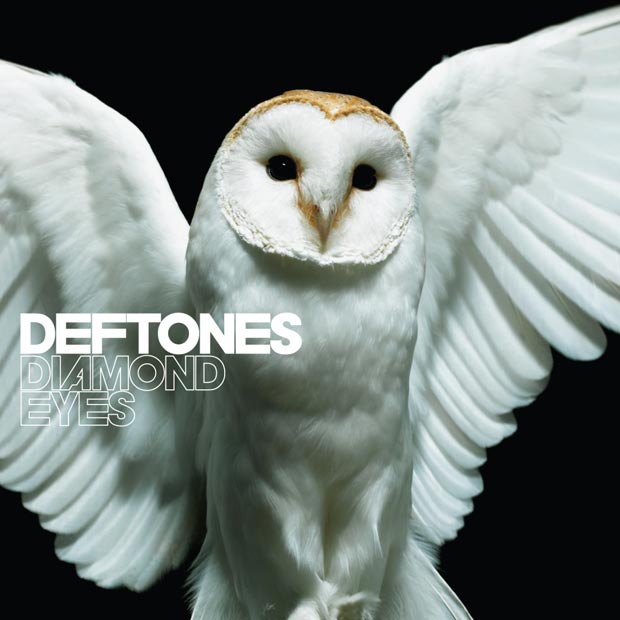 I think most Deftones fans know by now that original bassist Chi Cheng is in a coma and has been for quite some time now, so I won’t dwell too much on the past year or so. The brief summary for the others is that Deftones were putting together final touches on their sixth studio record when Cheng was involved in a car crash and the other members decided to scrap the album once the severity of their bassist’s condition was realised. Deftones were at a crossroad. They could either pack it all in, or they could fight on. They decided to fight.

In late 2009 the band and replacement bassist Sergio Vega recorded new songs which would feature on their official sixth album, Diamond Eyes. Lead singer Chino Moreno was adamant that the record would not have a negative vibe and he would avoid personal feelings if possible. Although Moreno’s lyrics are indeed quite abstract and impersonal on Diamond Eyes, you can’t help but wonder whose eyes the record name is referring too.

The music produced on this effort is brilliant and although some critics have labelled Diamond Eyes as ‘a return to form’, I wasn’t actually aware they had lost any form, because in my mind they always have been one of the gods of alternative metal. Their sound is unique and there will be very few others who will ever pull off a resonance as chilling as Deftones do.

Diamond Eyes kicks off with its self-titled single which contains a ballsy verse cutting into a typically Deftones-like melodic chorus. “Royal” and “CMND/CTRL” continue in a similar fashion until the slower “You’ve Seen The Butcher”. The following song, “Beauty School” is a vastly unappreciated effort, but it is right up there with Deftones’ classics. It creeps in with a reverbing guitar, followed by an infectious drum beat and the perfection is completed with Moreno’s warm lyrics and Vega’s soft rumbling bass. It has an emotion and energy within it that very few bands are capable of producing and proves the continuing tightness that this band possesses.

There are elements of the band’s third album White Pony throughout this new record and none more so than track six “Prince”. However, the next song is “Rocket Skates”, a popular rock radio track and undoubtedly one of the ‘hits’ on the album. A great slower song is found in “Sex Tape” before the albums winds down for the end of what is quite simply, a mind-blowing record. “This Place Is Death” is the final song and by looking at the title alone you wouldn’t need to be a brain surgeon to guess that it could be a very sombre finish. The band power through the track in a fast pace, while Moreno seems to just glide over the top with his typical mystic voice, adding the required emotion to the song.

Often, life-changing events can destroy people, but on the other hand, it can also trigger real artistic genius. Diamond Eyes is definitely in the form of the latter.  [ END ]