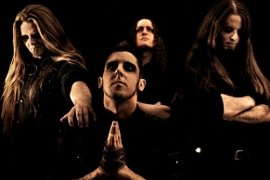 Black death mongers The Order of Apollyon, featuring members of Cradle of Filth, Aosoth and Akercoke, are having their debut album ‘The Flesh’ exclusively streamed on the German Metal Hammer site from the 16th to the 23rd. Go RIGHT HERE now and listen to the album before your friends.

Conceived in summer 2008 by former Aborted members Daniel Wilding (drums) and B.S.T. (vocals), The Order of Apollyon took on the role of the Celebrant of the Word of the Lord. The project is more than a simple extreme metal band; it is a musical covenant. The message is profoundly religious and adheres to strict paramilitary imagery while the music draws from elements of the ambient martial scene. The band began work on the first offering following the induction of guitarist James McIlroy (Cradle of Filth) and bassist Peter Benjamin (Aakercoke). The opus, entitled “The Flesh”, concentrates on the passage from the spiritual to the material.

The Order of Apollyon embarked on self-producing the album, recording the drums in the UK and the rest of the instruments in the notoriously sinister BST Studio. The band is a channel for delivering a harmonic covenant with The Lord that is honest as well as organic.

The Messenger delivers an actual soul, unlike the clinical sounding productions that intoxicate the metal industry. The Order’s first release aspires to praise the extreme metal scene of the late 80’s/early 90’s. The cult of Apollyon is set on disseminating the message of our God the Supreme Being. It will drive the masses to accept the indubitable domination of the Holy Spirit and to repent their sins before the impending Judgement. The disloyal scum shall writhe in Eternal Suffering, while a chosen elite shall bathe in glory and rapture. Unconditional devotion is the key.

With a rank of reputable musicians and potent iconography, The Order of Apollyon intends to propagate its divine philosophy across the entire world so as to reach a wider audience. The mission is to convert as many blind infidels as possible and to lead devotees to their salvation. For his Name. For his Glory. For his Victory. Judgement is upon us. Join The Order.