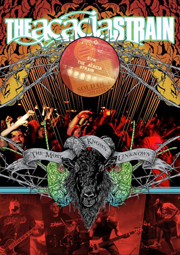 The Acacia Strain – “The Most Known Unknown” [DVD Review]

Attention metalcore fans all around the globe; The Acacia Strain have released their live DVD, which includes two live shows, and a tonne of extra goodies. When it comes to tearing apart the stage, or getting a massive circle pit going, nobody does it better than TAS. So when my boss sent me an email asking if anybody wanted to cover it, I nearly shat myself and jumped at the chance. Here you go, kiddies!

As aforementioned, the DVD package includes two live concerts, as well as some extra content. The extra good stuff is three music videos, a documentary of sorts, and a “Ten Seconds Of Fame”. I’ll explain those a little later.

The first disc is strictly a live show consisting of 21 tracks. These tracks are the band’s meat and potatoes; they’re the songs that make TAS epic. Some of the songs played ranged from “Passing The Pencil Test”, “3750”, “Skynet”, and “Angry Mod Justice”. Unfortunately, the band didn’t play any of their true original stuff, such as “All She Wrote” or “Cable Ready Techno Slut”. However, the set list chosen was still up to par. The band’s performance was decent, but I must say I have heard better. The instrumentation was spot on, with no major mistakes, where the vocals needed work. His vocals sounded strained, like he was trying too difficult to belt the lyrics out.

Disc two is another live set, this time containing 11 songs, rather than the previous 21. Every song performed in the second disc was done so on the first disc, so the live show isn’t really much different, unless you want to compare sets. What made me laugh though was one particular part on both discs. Vocalist, Vince, said “I want everyone in this room, to shit in their pants” just before a breakdown. He said it the same way in both shows, so it seems scripted, however it was still mad comical.

The documentary, when it boils down, is about how the band started, the names they used to go by, the signing of their first record deal, etc. It’s interesting knowing how a band gets noticed, considering every band has a unique story behind it. I won’t ruin any of the story, you’ll have to check it out yourself, but I feel it’s worth watching. The “Ten Seconds Of Fame” is a bunch of people standing in front of a camera before/after a show just giving their opinions on the band or other pointless shit. One kid says something about scene kids dying. Another guy talks about boners. It’s quite funny. I dig it.

And so there you have it. That’s the low down on one of the most brutal DVDs around. I strongly suggest picking this shit up, unless you’re a scene kid and like your soft “hardcore”. I apologize. That was uncalled for, scene kids. Rock out guys.

Check out the song: “Dr. Doom”