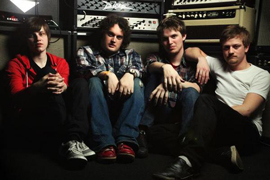 TAB the Band is certainly no stranger to having their music picked up for the soundtracks of hit television shows. With tracks “Looking Pretty, Pretty” appearing on HBO’s Entourage, “Masked Bandit” on CBS’s CSI: New York, and “Paid For By” on FX’s The Riches, it is no surprise that another one of their greatly sought after tracks is appearing on the premiere of WeTV’s Sunset Daze tomorrow, Wednesday, April 28th.

The track, entitled “Old Folks Home” is off the band’s celebrated January 2010 release, ‘Zoon Noises’, and is a perfect tune to compliment the reality show, which depicts the exciting, youthful lives of elderly coeds in a retirement community. The show premieres on WeTV (Women’s Entertainment TV) on Wednesday, April 28th at 10pm/9c.

A rock & roll band with an enduring fondness for pure pop and a wicked, sly sense of humor, TAB the Band defy easy categorization. Founded by brothers Adrian and Tony Perry, sons of Aerosmith’s Joe Perry, TAB the Band are not often described as classic rockers. They are a vibrant, contemporary band that blends the vigor of punk, the might of arena rock and the melodicism of power-pop, earning the admiration of Isaac Brock of Modest Mouse and J Mascis of Dinosaur Jr, alt-rock stalwarts who requested TAB the Band as their opening act.

Their organic quality has earned TAB the Band the respect of Rolling Stone (who give the band 3.5 stars for the album “Pulling Out Just Enough to Win”), The New Yorker, AOL Spinner, and VH1’s Best Week Ever to name a few. With new music in the works and a live tour with the Stone Temp Pilots underway, the future is very auspicious for this group of four talented musicians.