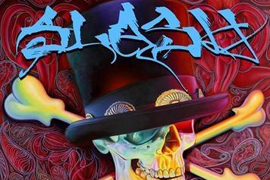 The Skinny: Most commonly referred to by his stage name, Slash, is a British-American musician. Best-known as the former lead guitarist of the hard rock band Guns N’ Roses, with whom he performed and recorded between 1985 and 1996, he later formed the eponymous Slash’s Snakepit and co-founded Velvet Revolver with his former bandmates Duff McKagan and Matt Sorum. Slash has received critical recognition as a guitarist; in August 2009, Time Magazine ranked him #2 on its list of the “10 Best Electric Guitar Players of All-Time”. He was also ranked #21 on Gigwise’s list of the “50 Greatest Guitarists Ever”. Now, as is very well suited, Slash is back with a self-titled solo effort. Watch out!  [ END ]