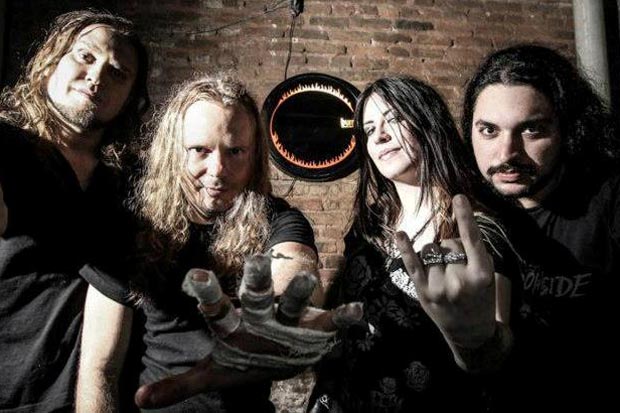 Shadowside has uploaded the video for the song “Hideaway” from the ‘Dare to Dream’ album, second studio effort from the Brazilian Metal band. This album was produced and mixed by Dave Schiffman (System of a Down, Audioslave, Avenged Sevenfold and others) and Howie Weinberg (Aerosmith, Iron Maiden, Metallica, Pantera, Rush and others), and reached position number 4 in the Brazilian Metal charts.

The video, directed, produced and edited by Luiz Felipe Amorim, took place in an abandoned garage in their hometown Santos, Brazil. It features the band performing as well as lead singer Dani Nolden playing the main character. According to her, the song talks about “people who are misunderstood, mistreated and put down by society for their whole lives, for the sole reason of being different and unusual. In this case, we portrayed it on a more personal level and showed a teenage girl accused by her mother of painting masks to disrespect her, to be aggressive, while all she wants is to express herself and ends up hiding who she really is”.

Also the band officially announces new bass player Ricardo Piccoli, who has been playing for the past few concerts. As well as an experimental musician, Piccoli is also a producer. “It was a pleasant surprise when I received the band’s invitation and it’s a huge pleasure to be part of the Shadowside family. I hadn’t been as active as a musician, I was mostly producing. It feels great to be back on stage with these guys.”, said the new member. Current lineup is Dani Nolden (vocals), Raphael Mattos (guitars), Ricardo Piccoli (bass) and Fabio Buitvidas (drums).

As of right now, the quartet are getting ready for the release of ‘Dare to Dream’ in Europe, scheduled for May 28, and plans their return to the Old Continent in the upcoming months. More information will follow soon.