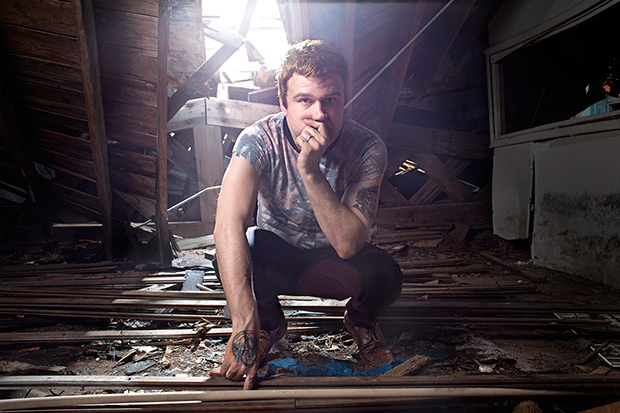 Say Anything: “Killing Little Girls One Metaphor at a Time”

Say Anything has undergone countless metamorphoses since their formation in Los Angeles, California in 2000 – starting with their name, which was initially Sayanything, not acquiring the space until sometime in 2002. The original line-up, consisting of frontman Max Bemis, drummer Coby Linder, Evan Span on guitar and Michael Levin on bass, released an EP entitled Junior Varsity, followed by their first full-length album, Baseball, in 2001. Shortly thereafter, Span and Levin quit the band, leaving Linder and Bemis with an ultimatum: either find suitable replacements, or let Say Anything fizzle out completely. Obviously, they opted for the first choice, but though they had a few members come and go, it wasn’t until 2004 that they found a long-term member in bassist Alex Kent.

In the meantime, however, Bemis and Linder had signed with Doghouse Records and had been writing and recording frantically, with Bemis laying most of the instrumental and vocal tracks himself. The stress of taking on such a daunting task proved to be too much for Bemis, however, and he suffered a mental breakdown during the recording period – a breakdown which left him wandering the streets of New York City, completely disconnected from reality.

In July 2003, some time after Bemis’ recovery, Say Anything once again returned to studios – this time to record …Is a Real Boy, which was released in August 2004 and included tracks like “Spidersong”, “Every Man Has a Molly”, and the band’s first single, “Alive With the Glory of Love”. The album was re-released in 2006 on J Records and included a bonus disc called …Was a Real Boy, which featured “It’s A Metaphor, Fool,” and the second single (and fan-favourite), “Wow, I Can Get Sexual, Too.”

Although …Is a Real Boy was a great success, it was only a prelude to what was yet to come from the band. Following a hiatus in 2005, at which time Max Bemis received treatment for his drug addictions and bipolar disorder, the band wrote and recorded In Defense of the Genre, which was released in 2007 and featured a slew of cameos by such reputable musicians as Anthony Green, Hayley Williams, and Gerard Way. By this time, Say Anything also had a concrete line-up: Bemis, Linder and Kent were joined by Parker Case on keyboards/guitars, and Jake and Jeff Turner, who also play guitar.

Still riding high on the success of their last two albums, Say Anything’s self-titled release hit stores in late October 2009. The album has shown a maturation in sound, especially in comparison to the early days of Baseball, and, according to Bemis, “literally defines everything about the band [they’ve] built so far.” The album debuted on Billboard’s Top 200 at number 25 – the band’s highest-charting album to date.

Say Anything is currently supporting Angels and Airwaves on their North American tour, which will carry them through til the end of May. No word yet on what the band has in store for us from there, but you can be sure that it will be phenomenal.

Check out the song “Alive With The Glory Of Love” here.