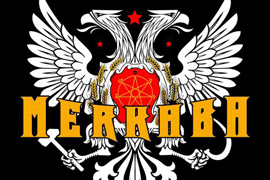 The Skinny: The collaboration between Joshua Adams and Carl Robota can be traced back to the year 2000. The group entered the Tulsa, OK music scene in the spring of 2001 and met with moderate success, attracting a small following. After a short hiatus, the group reemerged with a new sound and fresh material, re-christening itself Merkaba. The new group met with improved success and became a regular fixture of the Tulsa metal scene and eventually made forays into nearby Kansas, Missouri, and Texas. During this period, the group’s first full-length album entitled Seven was released. By the spring of 2005, circumstances led to the group’s unanimous decision to disband.

After the breakup, Joshua and Carl remained in contact and continued to write music separately. As time passed, they eventually accumulated enough material to warrant the creation of a new record. From a rather large pool of songs, six were chosen for The People’s EP. Through Joshua’s association with The Seventy Twos, its drummer Ryan Moody and guitarist Alan Mabe agreed to take over as the new rhythm section for Merkaba. After many months of recording and mixing, the new record was finally completed in the summer of 2009.  [ END ]