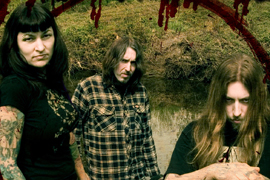 The Skinny: In the filthy sludge depths of Vancouver, the smoke clears – albeit briefly. With a thunderous cough, three shadowy figures emerge from the miasma. The throaty Deuce on guitar and vocals, with a tattooed drumming beauty and the heavy handed ‘The Judge’ on bass. Mendozza’s relocation to the desolate remoteness on Vancouver Island is evident on their 2010 release of Cabra Noche. Their sound has been molded by the dark, solitude of their surroundings. Crafting the album during 2009 took place in a small cabin lit by oil lamps and powered by generators. Many winter storms pounded the island with relentless rain and darkness and forced the trio into seclusion.

The result is Cabra Noche. A howling groove storm rolling over everything and crunching forward one slow step at a time. The heaving breath of low end bass and guitars combined with the Bina’s “laid back percussive artillery” of the drums, pound like the waves of the pacific, eroding the shoreline. Deuce’s vocals have been described “like he’s delivering his vox through a cloud of dopesmoke from beyond.” This heavy groove album will take you “back to the 70’s when everyone was stoned and liked their music slow and evil.” It will make you drink beer and dance and is worthy of a record burning at the community church. Mendozza is currently continually touring and writing material for their next album.  [ END ]