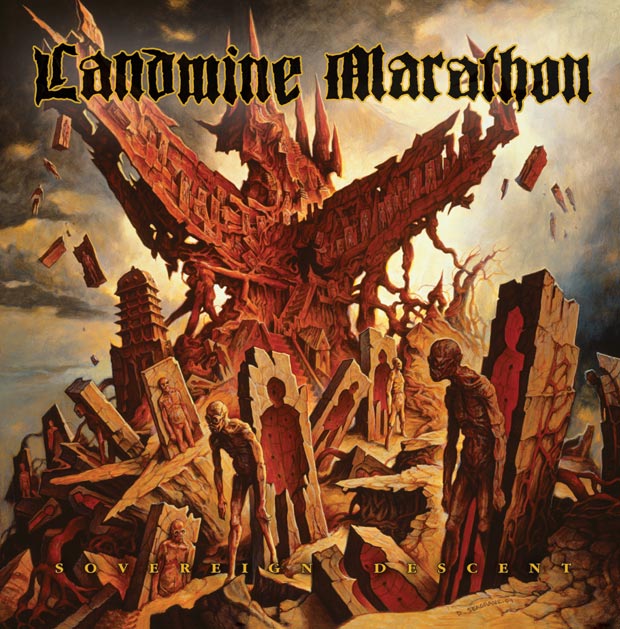 Landmine Marathon is a band I’ve heard of a vast number of times since they started to record their latest album Sovereign Descent. I watched a few of their studio videos to get an insight into this recording. This made my anticipation grow. Later, the band released their album art, designed by Dan Seagrave (Entombed, Dismember, Morbid Angel, Suffocation), and once I saw that my excitement reached its max. With such great art alone how could this album go wrong?

Nine tracks of pure death/thrash metal that leaves you grasping the edge of your seat are herein offered. This recording is a big change when compared to the usual North American death metal bands who as of late have been largely influenced by hardcore. This CD is fresh and aggressive. Landmine Marathon destroys your ear drums with thrashing as hard as humanly possible. Leading all this is one of the Hottest Chicks In Metal, Grace Perry who screams through every song making each track deadlier than ever. She may look innocent, but within her is an insanely powerful scream.

Each song on Sovereign Descent pretty much merges with the next as all the songs are similar. This however, is a good thing as, if you like one track, you’ll like all nine. “Steadfast Hate” clocks in at 7:18 minutes and is the longest song on the album. All the rest are each about four minutes of pure chaos. Fans of Walls Of Jericho, Light This City, The Funeral Pyre and Scarecrow will fall hard for this great band. Watch for them in the near future; they could just possibly be the next big American metal band.

Check out the song: “Shadows Fed To Tyrants”