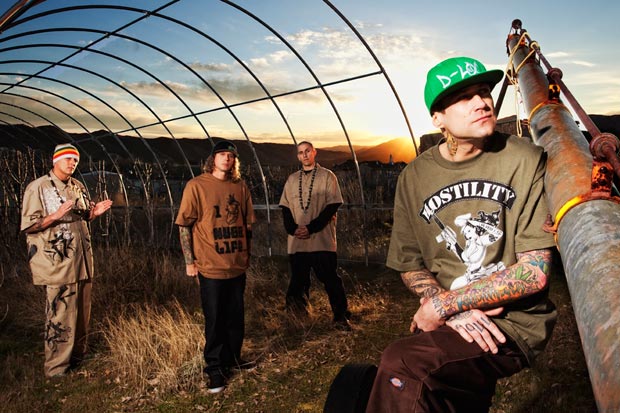 Right Now, Myspace is premiering ‘Long Live The Kings’, the brand new release from the Kottonmouth Kings, coming out on April 20th. Head on over to their Myspace page and take a listen.

The group spent eight months in the studio producing over 45 songs to create the next chapter in the ongoing legacy of the Kottonmouth Kings. The end result is the next dimension in the group’s ongoing reign as kings of the underground. ‘Long Live The Kings’ is propelled by the bounce of the album’s lead single “Stomp,” while “Rampage” runs some sonic destruction with the Kings’ trademark rip-hop sound. As always, the Kottonmouth Kings are on the frontlines in the fight for legalization and have recorded two new stoner anthems in “Reefer Madness” and “Let’s Do Drugs”.

Most recently the Kottonmouth Kings released their new video for the song “Mushrooms” off ‘Long Live The Kings’. Prepare yourself for a psychedelic journey into the mind of the newest King, The Dirtball. Take a trip on mushrooms and enjoy! You will see why The Dirtball is one of the most highly regarded and potent MCs in the game. Watch the video HERE