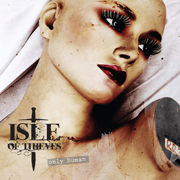 During my last year of college I would often hear about the band Isle Of Thieves. I really got into the songs through their MySpace and planned to get a copy of their album Only Human when I saw them perform live. Sadly, I never got the chance to hit up one of their shows. A year later the band remixed and remastered this very release with an extra song “Best Mistake”. I got a chance to hear the remake and these are my impressions.

The dynamics of this album are simple but this is exactly what makes it catchy. The simplicity definitely works in Isle Of Thieves’ favor. Japeth, the lead singer has a very unique sound and his vocals are very horsed making them instantly recognizable. The opening song “Hollywood (Cleft Lip)” is easily my favorite song on the album. I have played it on repeat and it still remains fresh; it boasts a very catchy chorus. Another song that grasps my attention is “Rockstar”. It has some killer lead guitar licks. The album consists of nine great tracks that all beg to be listened to.

Isle Of Thieves have had a great year since the release of Only Human. I can understand why there is a vast amount of media surrounding this group. Everyone who is interested in “the next big thing” should check them out for sure. Fans of The Envy, Mobile, Our Lady Peace and Moneen will enjoy Isle Of Thieves.