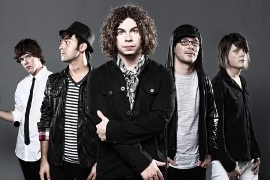 Guitarist Kevin Parrow from the band Transmit Now was kind enough to recently answer a few questions about the band’s debut album, Downtown Merry-Go Round. This disc is chock full of unbelievably catchy, hook-driven Pop Rock and Alternative tunes that offer up nothing but a good time. This is a solid rocking disc that is absolutely worth checking out. I would highly recommend it. This is what Parrow had to say.

Now that your brand new CD, Downtown Merry-Go Round is complete how do you feel about it? Are you satisfied with the outcome?
Kevin: We really tried to make a fun record that anyone can listen to at anytime. Well maybe not funerals, but then again…. We had a blast writing and recording it as well, and I think it shows. We are as satisfied with it as any group of musicians ever could be. I wish we could have put more songs on the record, but I guess that’s what the Deluxe Edition on iTunes is for!

What was the writing process like for this CD? Did you guys all write together? How long did it take?
Kevin: Being our first record, we did have quite a few songs that we had already written that got us the attention to get signed and whatnot. It was not nearly enough so we still had lots to write. Each song will be a different scenario, but Andy usually brings in an awesome pop hook and the main ideas for the song. It makes our jobs easier when the hook is already there, and we just have to make everything fit and sound good.

Give us some insight into Downtown Merry-Go Round and the meaning behind its title?
Kevin: It’s more of the state-of-mind that we all got while touring. It is a different downtown scene night in, night out. Kind of like a revolving door of new people all wanting to have fun.

When you begin to put an album together are you concerned at all about commercial success?
Kevin: We’d love to have commercial success! You think I want to grow up and get a real job and responsibilities? I think not!

Are there any tracks that are personal favorites or that have good stories behind them?
Kevin: My personal favorites are tracks 1 through 11. However, “Fast Ride” is probably the entire bands personal favorite. “Let’s Go Out Tonight” has been really awesome too. As far as an interesting story goes, when we were writing for the record, we wanted some dancy tunes and then we also still needed to tackle a ballad. So I thought of making the ballad a waltz just for shits and giggles. Just to kind of see what the label would say about it. So the chords and the progression for our song “The Last Thing” is literally a waltz that I wrote that we ended up rocking out to what it is today. So sometimes songs you write as a joke make it to a record.

You worked with Brett Hestla a very well known and well-respected producer. How did you get in touch with him and what was it like working with him?
Kevin: Well it was between working with Taylor Swift’s producer, Justin Beiber’s producer or Brett. So we thought, it is not as if those other guys ever did anything awesome, so we went with Hestla! Okay, so none of that is actually true, but it sounds interesting. The label hooked us up with him, and it was so much fun working with him.

Downtown Merry-Go Round comes to us by way of Silent Majority Group (Warner Music Group). Are you happy the way they are handling the record, regarding distribution, marketing and promotion? How has the label been accommodating the band’s needs?
Kevin: Well the record is just now coming out so all things are great so far. If we are not famous in a year, we might start looking for someone to blame, so SMG, you are on notice! They’ve been really good to us and as long as I get to do what I love for a living, that’s not going to change.

Where did the name Transmit Now originate from and is there a special meaning to it?
Kevin: It came from a couple fortune cookies at a Pei Wei that we were all eating at in Orlando. There would be a special meaning to it, but all the lucky numbers on the back of those damn things didn’t win me any money in the lottery. So no, nothing special at all.

How much roadwork do you expect to be doing this 2010?
Kevin: I hope that I forget what my bed looks like.

Any closing words?
Kevin: Does goodbye work? No wait! Buy our record! Now I can say goodbye!  [ END ]