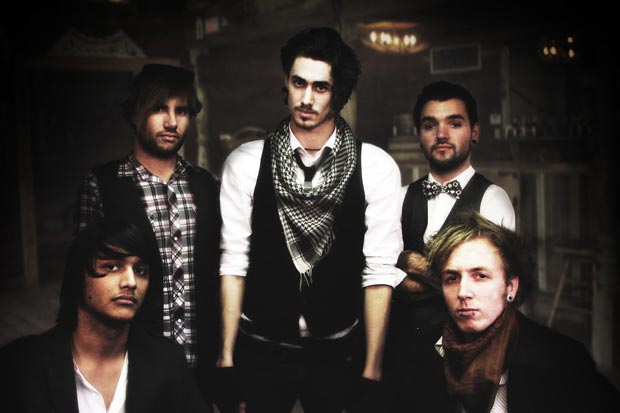 Interview with The Venetia Fair with drummer Chris Constantino

The Circus is the newest release from the experimental rock band, The Venetia Fair. Drummer Chris Constantino spoke with me recently about the writing process behind the bands new release. Having shared the stage with acts such as The Dear Hunter and Versa Emerge, The Venetia Fair is planning to spend as much time on the road as possible during 2010.

Different groups have unique ways of writing their songs. How do you guys go about writing your music? Is it a collective effort or is it more the efforts of one particular member of the band?
Chris: We have had a few months off from touring since the release of the album and we have done a decent amount of writing. Usually, at practice, Benny has some vague vision in his mind of how he wants to start a song, and since he does not play guitar, bass or piano he usually describes what he is picturing in really weird ways. Recently when starting a song the only thing he told us was he wanted it to be real “bumbly and clunkity.” He’s a real weird dude and sometimes it’s hard to understand what he’s picturing but we all throw our ideas out and discuss them until everybody’s excited. Chark, Sam and Joe are always trading melodies and parts and trying new things until something finally clicks. Once the music’s all written, Benny will sing nonsense words over them until he’s happy with a melody and then sit down with a recording of the music and write the lyrics.

Now that your brand new CD, The Circus is complete how do you feel about it? Are you satisfied with the outcome?
Chris: There will always be things on the album that we’ll hear and wish we could change or wish we’d done differently but overall we’re very happy with the record. Until they were actually recorded, the songs seemed to be in an almost constant state of revision so it felt great to finally let go and let them just be songs that we could enjoy.

Give us some insight into the record The Circus and the meaning behind its title?
Chris: The Circus began as a six-song concept piece that centered around a circus with no audience as a way to discuss the absurdity of human existence. When we started talking to Red Blue it became apparent that nobody wanted to release something with six songs on it since it wasn’t a full length and wasn’t really an EP. We also felt like we weren’t fully representing ourselves with the fairly unemotional, more philosophical, thought-based lyrical content and Benny was excited to get back to writing honest, relatable lyrics so we wrote two more songs and grabbed two pre-Circus songs and put together the beginning of the album that we call The Overture.

What can fans expect when they pick up a copy of The Circus?
Chris: We tend to play around with a pretty eclectic mix of styles and genres but the main goals behind the songs are that they sound theatrical, chaotic and catchy. Expect music that keeps you guessing with songs that you can tap your foot to.

The Circus comes to us by way of Red Blue Records. Are you happy the way they handled the record, regarding distribution, marketing and promotion? How has the label been accommodating the band’s needs?
Chris: We are very pleased with the way Red Blue has pushed the album. Without the hard working people at Red Blue, we would not have had the resources or funds to print, advertise and sell as many copies of our album as we have. We have filmed a Music Video for our song “The Ringleader” and we have had ads in such magazines as Alternative press and Substream as well as countless online features and write-ups. These are all things that without Red Blue we would not have had the resources to do. As far as our needs being taken care of, Mike at Red Blue literally does anything and everything he can to keep us hooked up. It’s a small, up-and-coming label so there are obviously certain things we can’t get that majors or bigger Indies can, but so far we’ve been very happy.

Are there any tunes on the record that are personal favorite or that have good stories behind them?
Chris: Personally my favorite song to play live is the album opener “A Man Like Me”. It’s by far the fastest and craziest song on the album. It is written about how Benny’s girlfriend cheated on him with Joe before they knew each other. It’s a longer story than that but you get the idea.

How much roadwork will you be doing in 2010?
Chris: We hope to be out for most if not all of the Summer, then we hope to start writing and recording some new material during the Fall and Winter.

Are you looking at any particular bands you will be touring with?
Chris: Currently were looking into a tour with Love Hate Hero in June, but we’re always open to new tour buddies.

What are some of the songs you get the best audience response to?
Chris: We open our set every night with “The Ringleader” and, for people that have never heard or seen us before, it tends to catch them off guard and they just stare at us until the chorus hits. At that point they usually (hopefully) start smiling and nodding to their friends in approval. If they don’t, then we know it’s gonna be tough to win ’em over but we have a lot of different stuff to show ’em so hopefully there’s something they can get into.

Any closing words?
Chris: What would The Crue do? (Motley Crue, that is).