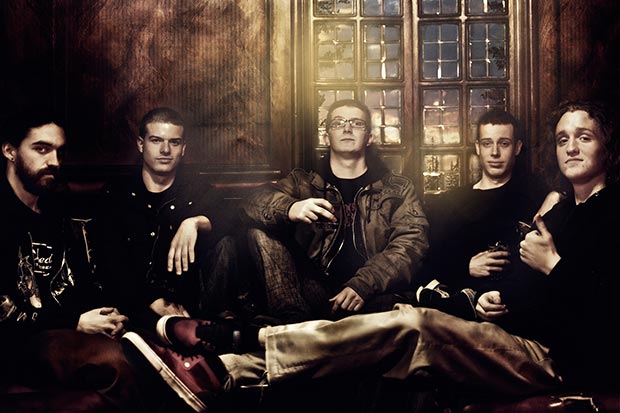 Guitarist Cary Geare from the extreme metal band Son Of Aurelius spoke to me recently from the recording studio about the band’s newest release The Farthest Reaches. This CD is a serious auditory onslaught that pounds the listener over the head and does not let up from beginning to end. Honestly, this is one of the heaviest, most technical albums I have ever heard and fans of all things extreme should be salivating in anticipation of its release on April 13th. The Farthest Reaches unquestionably sets the bar high for others in the genre and is an extreme metal heads dream come true. Here is what Cary had to say.

How are you doing Cary?
Cary: I am doing really good thanks.

Where are you at right now?
Cary: I am in the studio right now just dicking around.

Now that your new record, The Farthest Reaches is complete, how do you feel about it and are you satisfied with the outcome?
Cary: Yes, definitely we are stoked about it. We put a lot of time into it so we are happy to throw it on and listen to it.

Different groups have unique ways of writing their songs. How do you guys go about the writing process?
Cary: Well we kind of tackle it where one person will write and we all kind of learn it then toss riffs back and forth. We all bring something to the table.

The name of the band is quite interesting. Can you tell me the story behind it?
Cary: It is sort of based on Commodus, Marcus Aurelius’ son and in our sort of band world he is kind of like a fictional character that is kind of crazy and brutal and is part of more of a fantasy take of actual history. He was always known as a brutal and crazy guy. We also thought it was kind of a catchy cool name as well.

Are there any songs on the disc that are personal favorites or that have good stories behind them?
Cary: My personal favorite is probably “Farthest Reaches” or “Facing The Gorgon.” This is a really old song that I wrote a long time ago and it kind of just worked with the project. We put it on the CD and it works really well.

Every band has it’s musical influences. What are some of the bands that have influenced you and your music?
Cary: Well Decrepit Birth is one of them. They are local here in Santa Cruz and we have always really dug their music and what they are doing. I listened to a lot of Gorod during my portion of the writing for this CD as well. I also like really kind of catchy Swedish Metal stuff.

How much roadwork do you guys have planned for 2010?
Cary: We have some shows coming up with Whitechapel in May. We also have the California Metal Fest coming up in May as well. We are planning to tour pretty heavy this summer and we are hoping to be on the road a lot. We would love to go to Europe, which is kind of like our dream, to go over there and play, so hopefully we can get something lined up.

How do you feel the current economic slump is affecting the band?
Cary: Well it is tough to get credit. We have to get a new van for the tour and we are trying to figure out how to finance it so we are starting to get a little bit stressed out about that. Otherwise, it has not really affected us in any other way. I am sure we will get that stuff worked out anyway.

Any closing words?
Cary: Check out the album and keep trying to find cool new metal bands… they are everywhere!