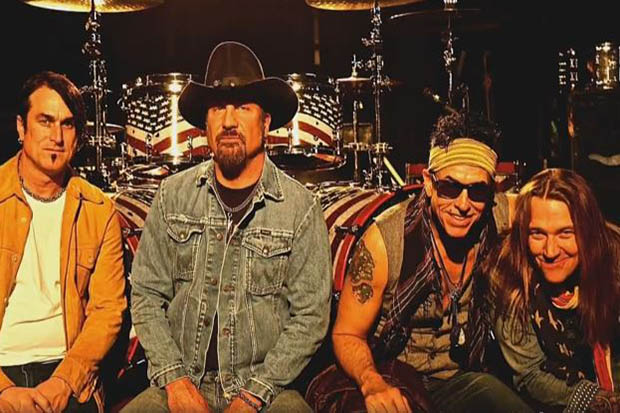 Jesse James Dupree, frontman for the band Jackyl, recently spoke with me about their tenth studio release, When Moonshine and Dynamite Collide. True to their roots, this CD is about as straightforward a disc as you can get. No pretenses and no gimmicks, just good old-fashioned groove laden rock and roll that will make you want to pump your fist in the air with reckless abandon. The band has earned two Guinness Book of World Records citations and the designation “The Hardest Working Band in Rock ‘N’ Roll” for performing 100 shows in 50 days as well as 21 shows in 24 hours. The band will once again be embarking on a tour in support of When Moonshine and Dynamite Collide. Here is what Dupree had to say.

Hey Jesse, how are you?
Jesse: I am doing great Bruce, thanks.

Where are you at?
Jesse: I am in Atlanta, Georgia.

Now that your brand new CD, When Moonshine and Dynamite Collide is complete how do you feel about it? Are you satisfied with the outcome?
Jesse: I am so ready to get this CD out there that I am about to bust. I mean it is one of those things where it cannot happen fast enough for me. This record manifested itself from this last year of touring and a good bit of that I did sitting on my motorcycle riding my Harley across the country on tour last year. So many of these grooves and these ideas came from being out on the road and on the back of my bike. That is the formula for a lethal rock record.

How do you guys go about writing your music? Is it a collective effort or is it more the efforts of one particular member of the band?
Jesse: I have written the majority of the tunes. I am not saying the other guys don’t write.

Give us some insight into the record When Moonshine and Dynamite Collide and the meaning behind its title?
Jesse: Absolutely! Absolutely! There was an old legendary Bluegrass singer named Jimmy Martin, there was this documentary on him and the theme was when moonshine and dynamite collide. He said the greatest thing in the special, he said, “I don’t believe those people in Nashville that tell me if I am a star or not. I will tell you who is going to let you know if you are a star… it is those people out there that will let you know.” in other words, he did not need to be validated by Nashville; he knew that he had a connection with the real America. This absolutely summarizes Jackyl. We do not need validation from the critics or from Rolling Stone Magazine; that is not how we exist. We exist because of there are rootsy people out there that want their music loud, proud hard and honest and they know they know they are going to get it from us. Now if a critic from Rolling Stone Magazine wants to take a liking to our stuff that is all fine and dandy, but at the end of the day we are not living and dying by that and we damn sure ain’t holding our breath.

I understand that you guys have personally contacted some of the fans that pre-ordered the CD. How did that come about and what was the experience like?
Jesse: First of all, we thought about what we could do as an extra perk for people who pre-ordered the record. We put it up on the internet and the response has been overwhelming. We are about to cut it off otherwise we are not going to be able to get to everybody in time. It has been a very humbling experience and we have gotten some incredible testimonies about what rock a roll means to these fans.

Did you ever imagine you would be releasing records so many years later here in 2010?
Jesse: I look at it more like we have only just begun… what are you talking about?

How is the current economic slump affecting your band?
Jesse: I do not think that the people that come out and support Jackyl can work any harder than they work. They bust their asses, they do their thing and it is definitely a group of people that are in a mindset of work anyway so I don’t know how it has affected them at all. If it is a little bit harder for them to make a dollar, they are going to party twice as hard.

A lot of bands that have a mega hit get tired of playing it. Has this ever been the case with “The Lumberjack”?
Jesse: That is kind of like asking me if I ever get tired of sex. I mean you know it is like saying that you have had enough sex and you are going to have your penis removed.

Are the rigors of touring taking more of a toll on you as you get older?
Jesse: No, I wake up everyday and take as big a bite out of life, as fast as I can, no matter what I feel like. We cannot get enough touring. I wish that things would unfold so that we could stay out on tour this whole year.

How much roadwork do you have planned for 2010?
Jesse: As of right now it looks as if we are going to be doing about fifty or sixty shows and that will be a good year.

In a hundred years from now what will the music history books say about Jackyl?
Jesse: They came and they raised Hell!