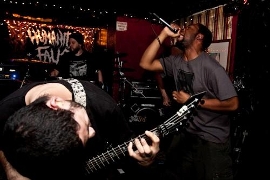 Eston Browne the lead vocalist of the Death Metal Band Humanity Falls spoke with me recently about the bands first full-length release, Ordaining the Apocalypse. Citing influences such as Morbid Angel, Ulcerate, Gorguts, Immolation and Mithras the band has created a unique sound that is all their own. Ordaining the Apocalypse is unrelentingly heavy, brutally punishing and is absolutely a record fans of Extreme Metal are sure to enjoy. Here is what Eston had to say.

Many of your songs are so hard and intense that I am sure they translate well into a live setting taking on a completely new life in front of a live audience. How does it make you feel when the emotion and power that you envisioned in the recording studio, come to life while playing in front of a crowd?
Eston: It feels very relieving. I think our live shows do us a lot more justice than our recordings could ever do, which I think is the greatest feeling. I also feel it is good to have a creative outlet that allows you to meet and greet people and at the same time express what you think and feel on a daily basis like how this music is. I’d like to think that the energy we’ve been carrying in our performances is based off of manifestations that have all occurred in our lives and I hope our fans can feel the same intensity on our record.

The name of the band, Humanity Falls, is interesting to say the least and sounds as if there is a story behind it. Where did the name come from and what is the story?
Eston: There’s no real backline to the story or origin of our name but the general idea behind the name is that it’s all a representation of the reality that mankind is ignorantly killing itself. This is what we try our best to emphasize and it’s our concept. The fact that we all enjoy Immolation was also an influence to the name as well.

Different groups have unique ways of writing their songs. How do you guys go about writing your music? Is it a collective effort or is it more the efforts of one particular member of the band?
Eston: Interesting question. The compositional process is very stressful at times, at least it used to be… and the way we composed is a lot different from how we do it now. For the most part, Ammo would write the riffs, bring them to rehearsal and our ex-drummer would play and I wouldn’t be satisfied, so then we would work around that until we got the result I wanted. The first four to five songs we wrote were strictly written and composed by me and Ammo because of complications and because we were all really picky about how we wanted certain things to sound like. I normally play a pretty active role in the creative process, I normally go over the riffs with Ammo and we usually touch and play around with the song until we get the sound we want. However, the last three songs we’ve composed have been a bit more of a collective effort as Ed’s style is influenced a lot more by grind and we like to mix that in as we’ve grown to enjoy it because of how unique it’s become to our sound.

I understand you are currently working on your debut full-length release, Ordaining the Apocalypse. How is that going?
Eston: It’s going great! All the songs are finished being written and we’re currently recording. We’ve done a pre-production version of it that we’ve been sending to some friends and selective people and we’ve been getting a receptive response. Our biggest complaints have always been our production of our demo and promo discs, we are well aware of this, so fans and people who will be introduced to our music will hear what it will sound like to its full potential. I’m eager to release it and see how the rest of the world will receive our first full length record because I think the first record for any band is always the most special and sometimes the most memorable. I would say it’s especially special to all of us because it’s our first time ever recording our music.

Can you give us a sneak peek into the kind of themes that you are working on for the new album?
Eston: The themes that we will explore on the album are very simple, yet straight forward. The theme we will be approaching is an apocalyptic one. The idea of the album is the same as the band name, to invoke the listener into really thinking, seeing and reading with our lyrics the conflicts of society. This is what I would like to call a concept record, but we’d like to do it with a more subtle approach.

Give us some insight into the record Ordaining the Apocalypse and the meaning behind its title?
Eston: We like to keep the album title consistent with the name of the band, as I mentioned, so the meaning of the title is based off of that concept. Life is inevitable. Death is inevitable. Everything that we see, sound, taste or feel is real. For some, they are caught in their own selfish, materialistic world and they don’t see the wrong in the things they do or as an escape, they may result to things such as drugs or alcohol to sedate themselves from the reality. There IS no escape from reality. We’re all guilty of trying to do this and for this reason, by fate we are ordained or doomed to die. Whether it is by the things we do or the decisions that are made by the government or the religion we choose to follow, the end is all predetermined because of our ignorant ways, and our resistance to change. Each specific song, lyrically, has a different philosophical perspective on the endless activities that may lead to mankind’s demise and this record is all about the result that we are due to face because of our decisions.

What is your view on the current state of Death Metal? How do you identify with the rest of the underground scene?
Eston: I enjoy a lot of the bands that are coming out now, and I identify with the underground scene because I love to support and to keep the scene alive but I like to keep it to a minimum. Ammo and I always attend shows and we always give respect where it’s due. A lot of the bands in the underground scene we’ve gained respect from and have earned their friendship because of our support to them and because of the shows they’ve seen us play and I appreciate that. However, I feel like a lot of bands, not even in our scene, but in general, could be a little more considerate of the bands around them and that there’s a lot of music that’s trite because of the current trend that exists in our genre.

Many bands, such as Flourishing, Pyrrhon or any other band we have gained friends with are under appreciated because of it. People like to give off this impression at times that the death metal scene is a brotherhood, which in fact its not. There are shady promoters religiously who don’t give a fuck about anything but money and the bands don’t get any better with this themselves. The bands always fall victim. Always. And that’s something that’s always gotten under my skin because I’ve seen this. In this scene, the only way promoters seem to care is if you bring them money. I’ve never understood this. If the promoters care for the music and the musicians care for the music and understand there’s no money to be made, why is this emphasized? A lot of bands are also touchy when they see that their music has made its way onto blogs, I say fuck em. Keep on downloading. The music is meant to be made for a reason, the more ears the better. I guarantee the reason a few bands that are recognized now is because of blogs, the internet and YouTube, so it definitely serves its purpose.

There are a lot of posers who not only go to shows and see bands, but play in them as well. You know, before it seemed to me that whoever was the most lyrically disgusting, fastest band was the most respected and promoters/agents actually went searching for talent. Now it seems to be the opposite. Whoever appears with the heaviest breakdown, the craziest down-tuned distortion, triggered drums and the illegible logo wins the prize. It’s like a fashion show! Since when did death metal become politics? It’s very frustrating to play and go to shows and see bands who I feel aren’t worth my money… and I end up leaving in disgust. This is why we exist, to put it verbatim the way Ammo does, “our music is designed for the poser-less.” Anyone who appreciates us will appreciate us because we create this music for ourselves, not for trends or to gain popularity.

Any contemporary or classic bands that you guys admire?
Eston: We recently shared the stage with Gigan, so I’ve been playing their first EP and their full length Order of the False Eye pretty frequently. Besides that, the new Vulvectomy, Cerebral Effusion and Gorevent records have been sounding good. On a local level, I admire Immolation and Malignancy and I can’t wait for their new albums to come out. Our friends in Morbid Terror are working up on an EP that they are going to release and Flourishing has an EP titled A Momentary Sense of the Immediate World which has been on constant repeat. They’ve been playing a lot of local shows and making a name for themselves, so I recommend anyone who enjoys our music to check out Flourishing. They’re selling it on iTunes and Amazon, so pick up a copy if you don’t have one.

What kind of preparation went into the live show?
Eston: There’s no preparation for our shows, just a lot of marijuana and alcohol consumption.

I know you are in the process of finishing up your CD, but do you have any touring plans for 2010?
Eston: Yes. We’re going to do an East coast mini tour in May with Abdicate and Short Bus Pile Up for about a week. We may do a tour in the summer as well, but it is all tentative at the moment.

Any closing words?
Eston: Thanks. We really appreciate all the positive and negative feedback we’ve been getting so far. We’ve got some merch and a lot of other things coming soon, but it’s been slow since we’ve been prioritizing this album. Don’t worry! It will be well worth the wait. Doing this album has been a great experience for us all, so we hope it is the same for our listeners. If anyone wants to say a friendly hello to us, do so! We’re always looking to hang with our fans! Anyway, you can keep in contact with us on MySpace. Hope to see some of you on tour!nbsp; [ END ]