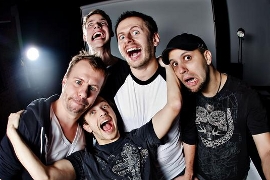 I recently spoke with Boris Pelekh the lead vocalist and guitarist for the modern rock band Hey Guy. The band’s new self-titled disc is packed to the gills with Infectious melodies and I do not feel it will take long for it to be noticed and when it does, expect to hear it flooding the airwaves. Bottom line, this is a really good, high-energy, modern rock record that is well worth picking up when it is released in May.

How are you doing Boris?
Boris I am doing excellent, thanks.

What have you been up to?
Boris We are working on a new self-titled Hey Guy record that will be out in May.

What has been the response to your last EP?
Boris It has been great. Originally, I did everything on my own including producing but the response was so great that I decided to put together a band.

Give me some insight into the name of the band?
Boris It is sort of a dichotomy. It is a playful name; however, the music is very serious. So basically, the name represents a kind of global feeling of musical expression that is not taken too seriously on the outside. For example our live show would be full of really well played, well thought out music, however we will be jumping around and having a good time.

I have heard the EP. Is the new material going to be similar to that release?
Boris We are actually redoing four tracks off of the EP and then we are adding one new track. I did the EP on my own and we decided to redo it now as a band.

You guys keep things pretty interesting thematically. Can you talk about some of the subjects you tackle on the new record?
Boris Thematically a lot of the tunes deal with philosophical thoughts, as far fetched as that may sound with a band named Hey Guy. Some of the songs are thoughtful love songs, not your typical love songs though. The overall theme of this album is a sort of feel good album, to lighten up and feel better about your life.

Are there any tracks on the new disc that are personal favorites or that have good stories behind them?
Boris Yeah, my favorite song on this disc is a song called’ “In Your Head.” The song is about psychological issue that I have dealt with all of my life. It is not song about life being so terrible I want to kill myself. It is more a song that says I have gone through this and I know how to deal with this and so can you, it is an uplifting song. It was really interesting because the song was drawn up as a sort of as a very, very slow acoustic song and it turned into a very pumping rock track. Every time we play it live, everyone is really excited to hear it.

I know you just said that you are in the studio now. How quick are you in the studio? Can you usually knock things out in a couple of takes?
Boris Yes and no. Everybody in the band is a qualified musician. When I was putting together the band after recording the demo on my own I just got the best guys that I knew in town. That is basically what the band still is today. In a way, we can learn the material super fast and get through stuff really quickly however we are also very very critical and picky.

When you are recording, do you settle on suitable tones fairly quickly or do you tend to obsess over them?
Boris There is always kind of a battle amongst us when it comes to this because we are all musicians and if there is an imperfection we all want to fix it but if you fix them all you take away the rawness of it… so it is always a kind of battle amongst ourselves.

What is the toughest lesson you have learned since the recording of the EP?
Boris What I learned is I definitely want to be a lot more organic in the recording process rather than be really modern and multi-track our music. For this record, we all went into a room as a band together rather than recording one part at a time and stacking them on top of each other. The thing about our record is it sounds exactly like our live show. One piece of music from our live show sounds exactly the way we recorded it.

How much roadwork do you have planned for 2010?
Boris Tons. Once this record is finished we are going to be on the road all of the time.

Are you looking to tour with anyone in particular?
Boris I do not want to name anyone now until we know for sure.

What is your musical background?
Boris I grew up playing classical guitar from a very early age. In my early teens, I picked up the electric guitar and started playing a lot of rock. In my late teens, I went to Berkley College Of Music and studied jazz and composition and all of that stuff. Then I started a band and did a bunch of crazy things that led me to here and now.

Any closing words?
Boris Check out the record. It is going to make a stamp on musical history. There are a lot of great musicians playing on it and there is something on here for everyone.  [ END ]