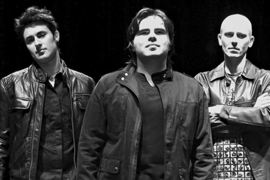 The Brazilian melodic rock group Auras are preparing for the release of their latest disc, New Generation. Lead vocalist, Gui Oliver and guitarist Ferpa Lacerda spoke with me recently about their debut release and what we can expect from the band in the near future. The band takes their influences from the likes of Journey, Survivor and Toto and has created a CD that is sonically brilliant and extremely enjoyable to listen to. These guys play a brand of infectious melodic rock that gained my attention straight away and got under my skin; I could not help but listen to more. Each and every song is packed full of great big harmonies and catchy grooves that make this CD immediately radio friendly and more than approachable to fans of all genres of music.

Can you give our readers a brief introduction to the band, for those who are unfamiliar with Auras. How it all got started, that kind of thing?
Gui: We are from Curitiba, south Brazil… we started the band back in 2007 when myself and Ferpa decided to create our own music, before that we were playing in a cover band. Auras is basically the result of a partnership between myself and Ferpa… our music is a mix of the classic 80’s AOR with some modern elements.

Ferpa: We felt that it was the right time for us to create our history. “Hungry Hearts” was the first song we did together, I believe we have a great chemistry in writing songs together. Shortly, we received an email from Mario de Riso asking for our demo album for evaluation and after some days we received another email, this time from Serafino Perugino, asking if we wanted to be part of their crew. I remember when Serafino asked: “You want to sign a contract with us?”, and later, “You are the first South American band to sign with us!”. That was awesome!

You guys are from Brazil. In what sense has your national and traditional heritage influenced the band’s music?
Gui: Brazilian music is very rich, we have samba and bossa nova… music styles that make Brazilian music famous worldwide. Of course we can’t deny that we are influenced in a way by all that surrounds us, all the culture that is part of our lives, but in music our influences are different, especially because in Brazil rock is not so popular and the great bands of our music style are American and European bands.

Ferpa: I grew up watching movies like Rocky, Karate Kid, Cobra and I was crazy about all those great songs! My family was also important… my older brother had albums from bands like Kiss, Def Leppard, Bon Jovi, Toto, etc… this also had an influence in my musical taste.

Gui: My father was a DJ back in the 70’s and I grew up listening to the bands he loved… Bad Company, The Eagles, The Guess Who, The Doobie Brothers, Queen, Toto, Santana, REO Speedwagon, Chicago, Journey… those bands were the first bands I had contact with, it was love at first sight!

Your brand new CD titled, New Generation is set for release on April 6th. Now that it is complete how do you feel about it? Are you satisfied with the outcome?
Gui: We are very happy, this albums means a lot to us… is the result of years of hard work and love for the music. We can’t thank all the people that have helped us enough. Frontiers, gave us all the support and the opportunity to show the international audience our music.

Ferpa: People all around the world are saying great things about the album and we are very happy. We worked hard on it and the most important thing is that we believe in our music and we knew that we could go further… and here we are!

Ferpa: We are rehearsing a lot and the band is sounding great. It’s hard to pick one song, I love all of them, but “Love To Survive” and “Forgive And Forget” are great!

How is the current economic slump affecting your band?
Gui: Well I believe all this stuff that happened affected not only the music industry but all the sectors of society. The music industry has changed in the last years, bands don’t sell anymore what they used to sell and we have to deal with this… the internet, the music sharing… we just have to adapt.

Ferpa: That’s a great question! I believe that rock fans, especially the AOR, Melodic Rock fans are still loyal. You know, formerly the bands used to be on the road, making tours to promote the albums and nowadays the bands are making records to promote their tours.

What is the toughest lesson you ever learned in the studio and on the stage?
Ferpa: Every day we learn something new, we can compare a band to a big company or even to a marriage. On stage I learned that it doesn’t matter how many people you’re playing for, you just have to do the best.

Gui: During the process of recording we really learned a lot, it was our first album so we actually had a lot to learn. We also had the opportunity to work with Dennis Ward and he helped us a lot and was always a nice guy. He is one of the best at what he does!

Any concrete plans on how you will promote the release of this debut outside of Brazil?
Gui: We still don’t have anything concrete, but we are looking! I can tell you that we want it so much.

Ferpa: I believe it is just a matter of time!

How much roadwork do you expect to be doing this 2010?
Gui: We always say that Auras is a live act band, I really believe that there is no sense to be only a studio band. That’s why we expect to play live in several countries… that’s really our goal.

Ferpa: We are very excited about it and believe me, we are ready for this!

What kind of preparation goes into your live show?
Ferpa: Nothing special. It is basically what I do when I’m home… I don’t drink or smoke, I try to eat some healthy food and drink a lot of water.

Gui: Drinking water is very important… I also have to sleep well! Musicians on stage are like athletes.

Ferpa: We also do vocal exercises… and… the last thing we do before we go on stage is say a prayer, then we’re ready to rock!

Any closing words?
Gui: We would like to thank everyone for the support. The fans, the press, our record label Frontiers Records. We hope people enjoy the album and hope also to see you all on the road!

Ferpa: Buy the album and enjoy it. It was made for all the rock fans with our hearts and souls! Thanks!  [ END ]