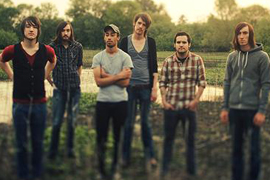 Interview with A Hope For Home guitarist and vocalist Matt Ellis

Realis is the sophomore release from Facedown Recording Artists A Hope For Home that definitely highlights the bands maturity as songwriters and musicians. Matt Ellis, the band’s guitarist and vocalist spoke with me about Realis, an intricately woven tapestry of electronic beats, synthesizers and distorted guitar that create a sound that is all their own. The band is currently on tour as part of the “Young And Wreckless Tour” and they plan on being on the road as much as possible during 2010. Here is what he had to say.

Different groups have unique ways of writing their songs. How do you guys go about writing your music? Is it a collective effort or is it more the efforts of one particular member of the band?
Matt: Every song is a little different for sure. Sometimes one of us comes up with the basic outline of a song, sometimes we combine a few different ideas, sometimes we just jam. We definitely let our influences creep in from time to time, as any band will do. That is why, in my opinion, The Everlasting Man (our last record) sounded a lot more sporadic and less cohesive than Realis. We wrote that whole record over the course of about a year and we were probably trying to be four different bands at four different periods of time and you can definitely tell on the record. Realis is a lot more focused and cohesive.

Your brand new CD titled, Realis, is set for release on March 30th. Now that it is complete, how do you feel about it? Are you satisfied with the outcome?
Matt: I am really stoked with how it turned out. There were definitely a few times when I had a little nervous attack, one I can remember was on the couch of the studio, listening to the first mix of the record, realizing how different it was and feeling like we were totally screwed. However, I am excited about that, because I know we wrote what we wanted to write without worrying about being cool or selling a million records, or whatever. Chris is such an amazing producer and it was such a blessing to be able to work with him. He runs a studio in Seattle with my favorite producer, Matt Bayles, and those guys have done records by bands like Botch and Isis, and it was insane to work with them.

Give us some insight into the record Realis and the meaning behind its title?
Matt: Realis is about the search for meaning. Over the course of this band’s existence we have seen so many different facets of the “Christian music industry,” and different kinds of bands, whether they be a ministry, or “Christians in a band,” or militant evangelists. We were exposed to a lot of that over the last year of our touring with label mates and playing at festivals like Cornerstone. We began to sit down and ask ourselves what kind of band we wanted to be, what kinds of things we wanted to say. And not that any of that stuff is wrong or anything, but I at least felt very uncomfortable standing on stage and telling people God was going to send them to hell and then turning around and selling a T-shirt with my bands name on it. Anyway, to get back to the point, Realis, then, became my personal search for understanding why I believe the things I do, and asking myself if there really was a God amidst all this. It is a deeply personal record and it’s laced with doubt and fear, but I’m really proud of what we did with it and my goal is that it would stand on its own after the lights and frenzy of sermon at a hardcore show die down.

Are there any contemporary bands that you guys admire?
Matt: Definitely. We never get to play with them, however. We always joke with some of our friends in other bands about how we should have been doing this in 2003 when Hopesfall was getting big and when Thrice and Thursday were at the top of their game. Those bands are definitely the bands that got me into music and I still look up to them today. As far as contemporary bands, I would say a huge influence on us is this band from Sweden called Cult of Luna. We listened to them a lot while writing Realis. I’ve been way into bands like So Long Forgotten and The Felix Culpa a lot lately. Really great, passionate music.

How much roadwork do you guys expect to be doing in 2010?
Matt: As much as we can! We are out right now with our label mates in In The Midst of Lions, Hands and Onward to Olympas. It has been a great tour. We have a couple other things in line that aren’t confirmed as of yet but we will definitely be out on the road as much as possible all year.

All of that passion that you play with must be tough on you physically. How do you prepare for the physical demands of a tour?
Matt: Well, the first week is always the worst. Sore necks and bad sleeping schedules are never fun. It really gets to a point where you just get used to it and you have to roll with the punches and take it day by day. Some of the dudes on this tour are into working out, but we usually sit around and read. Not the healthiest lifestyle!

When you are on the road for a while, I am sure you see and experience many different things you might not even have known existed. Are there any stories that stand out in your mind as being exceptionally strange or odd?
Matt: I love traveling, and it’s amazing to think that all I had to do to be able to travel the country for free is write a couple silly songs. We always try and hit up famous places or tourist attractions while we are on the road. One we are trying to see this tour is the Georgia Guidestones. They are these giant granite monoliths in Georgia that are basically instructions for humanity to rebuild itself after a coming apocalypse. Conspiracy theorists are all up on it and think it is the Illuminati and all this crazy stuff. So ridiculous. Google it. Hopefully we will be able to check it out!

When you are out on the road anything can happen and often does. Can you think of any disastrous events that happened while out on tour? How did you solve the problem?
Matt: We have been really blessed with great fortune on the road. We have never had bad van trouble (yet) and only one really terrible snow storm where we drove off the road in a freak white out storm in Montana and barely made it to the next town to stop, which happened to be a prison town. It was pretty ridiculous.

Life out on the road can be very difficult. What keeps you going on those long drawn out tours? Do you have any inspirational stories that have taken place on the road that you would care to share?
Matt: Just little things like people you’ve never met in a town you’ve never been to that know your band and the words to our songs, people who let us stay at their houses, bring us food, whatever. Touring has shown me that so many people can be inherently good and so caring. It’s very encouraging.

Do you find it difficult being away from family and friends for such an extensive period of time? How do you cope with the separation?
Matt: It definitely is. I don’t know how we would do this without technology like cell phones and internet or whatever. Lots of texting and phone calls! It is always good to get home and see your family and girlfriends after a long tour. They are all so supportive, and that definitely helps.

Any closing words?
Matt: Thanks to anyone who has stopped by our page to listen or came to a show, or whatever. We couldn’t do any of this without your support and it means the world to us!  [ END ]