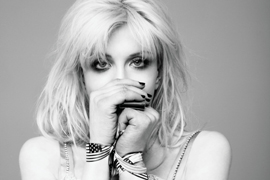 The Skinny: Hole is an American alternative rock band that formed in Los Angeles in 1989 and initially disbanded in 2002. The band is fronted by vocalist–rhythm guitarist Courtney Love, who co-founded Hole with former songwriter–lead guitarist Eric Erlandson. Hole achieved considerable commercial success throughout the 1990s. Their second album, Live Through This, was critically acclaimed and regarded as one of the greatest albums of the decade, as well as their most notable work.

Hole’s style of alternative rock was initially influenced heavily by punk rock, no wave and noise rock, though as they progressed they began to incorporate elements of grunge and pop rock into their sound. In 2009, Love announced she was reforming Hole with former Larrikin Love guitarist Micko Larkin, though Eric Erlandson has implied no reunion can take place contractually without his involvement. However, on January 1, 2010, www.holerock.netwas launched, promoting Hole’s upcoming album, Nobody’s Daughter, and contained links to various social media pages including Facebook, Twitter, YouTube and MySpace.  [ END ]

Prizing:
FIVE (5) lucky fans of Hole will win a FREE copy of the upcoming, much anticipated, new album, Nobody’s Daughter. This is killer!