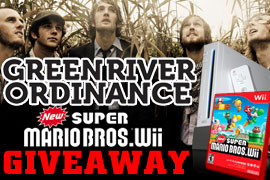 The Skinny: they may be called Green River Ordinance, but the band is anything but green. They’ve lived the life, and on stage or in the studio, this fact is obvious. Smooth, polished and professional, their musicianship and stage presence belies their youth. They look like rock stars. But that’s where the similarity ends. You won’t find these young men bashing their way through hotel room walls. Even after all this time in the business, they are still as gracious, enthusiastic and real as the day they recorded that first CD in their church basement. They are as likely to be seen having a quiet lunch with their grandparents as they would be hanging at the Whisky in the wee hours of Sunday morning. Positive in the face of all the adversity rock and roll can throw at them, the joy they have with each other, and with their music, shines in their faces. They’re making their own rules, taking their own place in time, making their own mark on the world..  [ END ]

How to Enter:
Just click on over to www.totalassault.com/contests/id/02685 and fill in the form in the bottom right-hand corner.

Prizing:
Ft. Worth, Texas rockers Green River Ordinance are getting back out on the road in support of their debut album, Out of My Hands, and new single “On Your Own.” To celebrate the tour and success of their album, the band and PureGrainAudio are teaming up to give away a Nintendo Wii and new Super Mario Bros. game!