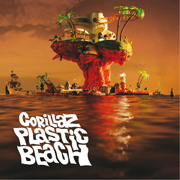 Liam Gallagher’s best pal, Damon Albarn, is back with his old side project Gorillaz. The virtual band released their third album Plastic Beach in March and it seems to steer in a slightly different direction from previous albums Gorillaz and Demon Days. There’s a diversion from the pop side of things and it could be argued that elements of Albarn’s other side projects; Monkey, and The Good, The Bad & The Queen, seem to emerge. Plastic Beach does indeed lack the classics from previous Gorillaz albums such as “Feel Good Inc.” but Plastic Beach more than makes up for it with mature high quality songs which eventually grow on you.

Once again guest vocalists add a real edge to Plastic Beach as they did on the previous two albums. Snoop Dogg kicks off proceedings in “Welcome To The World…” superbly well, sounding smoother than ever. The other guest vocalist highlight comes from Lou Reed on “Some Kind Of Nature” whose deadpan sound really adds a bit of bite to the album in his own cranky way.

Plastic Beach is just under an hour long so there can be no complaints of being short-changed as you surround yourself with Albarn’s 80’s synth sound and reggae-esq bass lines. Admittedly you can find yourself a little lost in the first few listens as you try to get your head around the different styles and sounds, but with the diversity of tracks available, everyone will emerge with differing opinions of which selection of songs are better.

While first single “Stylo” may be one of the more radio friendly efforts, there are other gems worth uncovering too. “Empire Ants” begins with a emotional intro from Mr. Albarn himself until the synths creep in for what can only be described as ‘bliss’ along with the soothing voice of Yukimi Nagano, lead singer of Little Dragon. The following track “Glitter Freeze”, a synth-based instrumental, is every bit as satisfying with a fuzzy bass line similar to recent efforts by Muse.

Plastic Beach is a relaxing, upbeat effort from Albarn and there is no reason why he should devote any more time to Blur as it’s pretty clear that he’s still doing just fine on his own. Plastic Beach is a great record and will no doubt be one of the musical highlights of 2010.  [ END ]