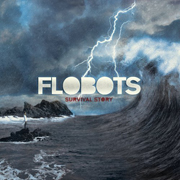 Flobots are a hip-hop band with a difference. These guys like to mix their beats with some rock music, I’d like to think of them as an angrier Fun Lovin’ Criminals. The six band members were brought together by Jamie Laurie in Denver, Colorado in 2000 and latest effort Survival Story is their third album.

The record certainly isn’t special but neither is it terrible; there are some good rock songs involved with neat if not a little ordinary, rapping. The thick riffs are enjoyable and even a few violins are chucked in to vary the sound. “White Flag Warrior” is a particular highlight with a frisky second half to the song which contains a pretty huge chorus and next track “By The Time…” follows with very catchy finale too.

Despite “Whip$ & Chain$” and especially “Infatuation” containing some great music, they are surrounded by what can only be described as “filler”. If Flobots could step up their consistency they could be a far more popular band than they already are. Unfortunately many bands fall into this category these days and whether it be a lack of creativity or otherwise, Flobots need to up their game just a notch more.

There is promise there, but after three albums of average-to good material, it’s time Flobots step up before it’s too late.  [ END ]