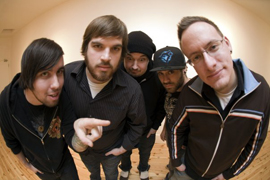 Dancing With Paris: “The Kids Call It Groovecore”

The Skinny: So Meshuggah, Fear Factory and the Deftones are all chilling outside the venue of your choice. All of a sudden a number of Pop sensations walk out the doors and begin conversing with the bands. An overly excited fan comes out of the venue and for no reason whatsoever throws a Molotov Cocktail into the middle of the group. The makeshift bomb explodes and everyone is rushed to the hospital. The only way to save these musicians from this terrible tragedy is to combine them into five men, James Manning, Andrew Freiday, John Dow, Terrence Harris and Andrew Wilson; also known as Dancing With Paris. We have dubbed them “Meshuggah-Pop”, as opposed to their name for the sound, “Groovecore”.

The boys in DWP combine Metal, Hardcore and Pop to bring you an awesome mix which is both heavy and ridden with hooks. With influences ranging from Bjork to Architects and all over the map, you know you’re either going to be looking at a complete and utter mess or something totally awesome; in this case; the latter. You can check out Dancing With Paris’ debut EP, There’s Something In The Water and download it for FREE on their MySpace page. Take notice of all the artwork surrounding the band, from their album cover to the paintings at their merch table and on their shirts. This art is all the work of guitarist Andrew Wilson and looks amazing, a must-see for any DWP fan and fan of art in general.

Dancing With Paris is currently writing a brand new set of songs for their upcoming album which has yet to be named. They will be hitting the studio in the coming months and hopefully filming a music video soon. They have promised that this album will be heavier and like nothing we’ve heard before. The boys have a lot of shows coming up, so check them out and get stoked on the upcoming album. The picture on the video is old but here is “There’s Something In The Water”, the title track off the debut EP.  [ END ]