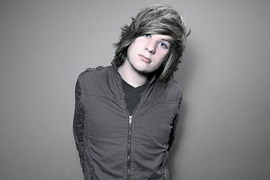 The Skinny: Breathe Electric is the brainchild of Chicago, Illinois native Grant Harris. A mix of electronic, rock, pop, and a touch of hip hop, Harris’ music is sure to make fans get up and dance. Although Harris writes and records the music himself, for live performances he enlists the assistance of Kyle Fasel on bass and Aaron Eberly on guitar, ensuring that Breathe Electric’s performance is anything but your average DJ set.

Grant released his first EP, Honestly, one year after forming Breathe Electric in 2007. The album was generally well-received, and critics commended Grant for bringing something fresh and new to a somewhat oversaturated genre. Breathe Electric toured extensively to promote the album, including being part of Warped Tour in 2009. Honestly sold more than 5,000 physical copies, as well as 30,000 downloads of the title track off iTunes.

Still riding high off the success of Honestly, Grant released a second EP, entitled Emotion, in August 2009. This album shows a definite evolution in Breathe Electric’s sound, with a greater range in sound from one track to the next, more dynamic vocals, slightly better lyrics, and, of course, even more autotune. While this change may be partially attributed to Grant having the help of producer Ian Kirkpatrick in studio, it is mainly a sign of growth within the artist himself.

Breathe Electric will be touring the United States extensively from now through May, at which point they’ll be joining Warped Tour for the second year running. Merch is available through SmartPunk.com, as well as the band’s MySpace. You can also check out the latest single, “Stay With Me”, on iTunes.
[ END ]