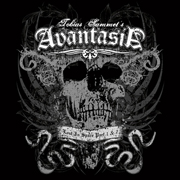 Since this is a package of two past releases, there are reoccurring images from the EPs. The photos of Tobias Sammet were reused and the background design from Part 2 was edited in a black and grey colour sequence. It is the cover image of a skull that distinguishes this release from the other two though. Also, the logo has been slightly altered giving this release a whole new feel.

The album begins with the familiar single, “Lost In Space”, from Avantasia’s full length The Scarecrow. Two additional versions of this song are performed at the end of the album as well. Also from The Scarecrow is “Another Angel Down”. In my opinion these are the two best songs on the album. Now, if you are worried that all the songs are re-releases, fear not. This album holds many surprises. Original songs include “The Story Ain’t Over” and “Promise Land” but are, in my opinion, lower end versions of Sammet’s previous work. Lost In Space Part 1 & 2 also features a few cover songs such as “Lay All Your Love On Me” (ABBA), “Ride The Sky” (Lucifer’s Friend), “Dancing With Tears In My Eyes” (Ultravox) and “In My Defense” (Freddie Mercury). These tracks are redone in an Avantasia style, making them sound their own, bringing original takes on familiar works.

While rocking to familiar tunes on this compilation, you might be able to identify a few familiar voices as well. These would be: Amanda Somerville, Jorn Lande, Michael Kiske, Bob Catley and Eric Singer. With performers like this alongside the mastermind Tobin Sammet you can’t go wrong. It is just like every other Avantasia release with heavy metal instrumentals. This release has got my stamp of approval for efficiency and great entertainment value. Fans of Edguy, Warrel Dane, Ayreon and Liv Kristine will like this release.  [ END ]