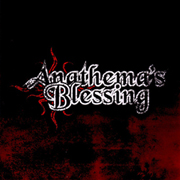 After putting the CD into my player, I cranked up the volume and heard some good guitar picking riffage. A few seconds later the rest of the instruments came in and the keyboards took over the previous guitar riff. There was a minute of instrumentals and then the vocals stepped in. This set the pace for the rest of Anathema’s Blessing. Throughout the album you will hear all sorts of great metal instrumentals backed by high vocals. There is certainly no guessing which bands influenced Anathema’s Blessing.

A track that drew me into this band was “Sell The Soul”. The keyboard intro has kind of a Janne Warman feel about it. After that there is some great heavy metal instrumentals followed by some low to high vocal lines. Another song that grasped my eardrums was “Lords Of The Sky”. The chorus is fairly simple to memorize so you might find yourself singing it later in the day.

It’s rare to hear a band like Anathema’s Blessing in Ontario. If these young musicians keep up what they’re doing now a fan base will definitely form under their feet. Fans of Sonata Arctica, Symphony X, Stratovarius and Warmen will dig this band.  [ END ]

Check out the song: “Sell The Soul”