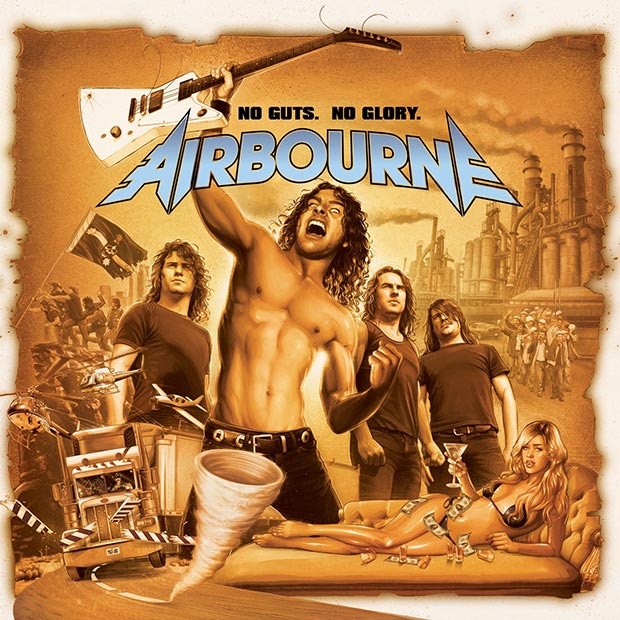 Airbourne – “No Guts, No Glory”

Australian rockers Airbourne play what I like to call “beer music.” That is, music that sounds pretty cool when you’re sober, but super-freakin-rock-and-roll-awesome when you have your beer goggles on. The lone guitar introduction eases you into the first song “Born to Kill” the same way a bully might coax you down an alleyway by sneerily promising that he will be your friend, before he punches you in the face and steals your lunch money.

And this is one straight talkin’ bully of a record. Track two chimes “There ain’t no way but the hard way, so get used to it” and “Get Busy Livin'” also tells it how it is: “You gotta give it all that you can, You gotta turn it up and play it loud cause that’s what livin’ is all about.” Well, who can argue with that?

No Guts, No Glory has riffs abound, as David Roads’ punchy chord progressions whomp through the mix in a classic Gibson guitar/Marshall amp combo while Joel O’Keeffe’s oftentimes Jack Black in ‘School of Rock’ type vocal stays just on the right side of tongue-in-cheek.

Producer Johnny K (also producer of Disturbed albums, and Machine Head’s Supercharger) has done a stand up job with this album. The tight mix emphasizes the band’s incisive skills as a rock outfit, and the classic rock sound is the perfect platform for songs about women, alcohol, and sticking it to the man. Sure, it sounds a lot like AC/DC, but that’s certainly not a bad thing.

So why would you want to listen to this record? Because you were too compliant in your youth and you want to at least pretend that you were rebel enough to skip class to drink beer as you jam with your band. You might not be living the rock and roll dream, but through No Guts, No Glory, Airbourne allow you to experience it vicariously through them. Cheers.  [ END ]