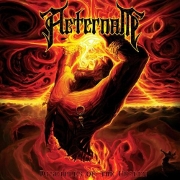 Aeternam – “Disciples Of The Unseen”

For those of you who aren’t totally up to speed on your Ancient Egyptian mythology, the Eye of Horus is a symbol of protection and royal power. It was used to adorn funerary amulets, jewellery, and in more recent times, the CD art for Quebec band Aeternam’s album Disciples of the Unseen. A further look at the artwork depicts vocalist Achraf Loudiy wearing an ankh pendant and wearing Tutankhamun-esque makeup that would put even Brian Molko to shame.

It is these dramatic aesthetics that pervade Aeternam’s entire record, and with song titles including “The Coronation of Seth,” “Angel Horned” and “Esoteric Formulae,” it’s clear that the theatrics are present both lyrically and musically.

Movie fans might remember Hamunaptra as being the fictional setting of 1999’s ‘The Mummy’, and the song “Hamunaptra” as performed by Aeternam on this record is particularly striking as Loudiy growls “Open the book of the dead, You’ll see the truth, Shining in the sarcophagus of the lord.” And each track on Disciples of the Unseen is just as intense as the one before it.

Track six, “Iteru” forgoes the death metal stylings of the songs prior, letting the band’s Middle Eastern flavour take over before returning to the powerful riffs and aggressive rhythms in “Goddess of Masr” in which Loudiy’ sneers and snides his way through yet more histrionic accounts of, well, something; “within her heart the virtue of Massra, the perfect one arised” he chides with a rumble. “Dark mother of all civilizations, embrace my soul and let me die in your heart.” Crikey.

On the whole, this is a more-than-solid debut album. The band members display their skills impressively without crossing the line into pretentiousness, and the ethnic influences keep the record interesting enough to set it apart from many of its thrash metal peers. So if you’re in the mood for some melodic death metal with a modicum of emo Ancient Egyptian folk then Aeternam should be top of your list.  [ END ]